Subscribe
Will other Democrats 'hit the trail' with Tulsi?

Will other Democrats 'hit the trail' with Tulsi? 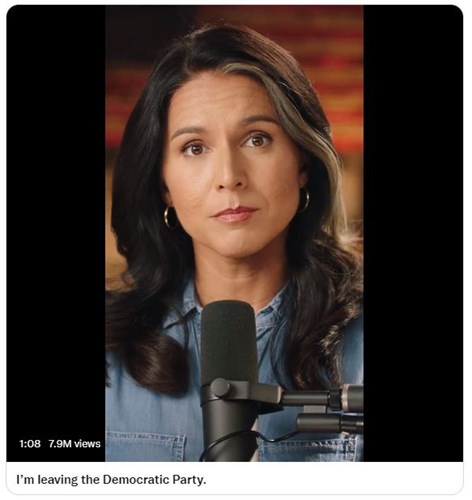 In a video address on Twitter yesterday, the former Hawaii congresswoman (right) minced no words in bidding goodbye to the Democratic Party, which she described as a "woke" party controlled by elitists, warmongers, and ideologues.

"I can no longer remain in today's Democratic Party that's under the complete control of an elitist cabal of warmongers who are driven by cowardly wokeness, who divide us by racializing every issue and stoking anti-white racism," Gabbard stated.

She went on to list several other of what she considers the party's shortcomings, including hostility toward faith and spirituality and its open-border policy. Then she asked other "independent-minded" Democrats to exit as well: "If you can no longer stomach the direction that the so-called woke Democratic Party ideologues are taking our country, I invite you to join me."

As Fox News reports, the former House member's announcement was greeted by both sides of the political aisle – liberals questioning whether she ever really was a Democrat; conservatives applauding her for being an independent "free thinker."

Jameson Taylor, director of policy and legislative affairs at AFA Action, predicts the public is going to see more and more Democrats like Gabbard leave the party.

"We're talking about people who can think for themselves; people who are realizing that the modern-day Democratic Party hates America," Taylor tells AFN. "The current Democratic Party is anti-American, they hate God, they hate the Constitution, and they hate freedom. [And] we're seeing a foreign policy that is in shambles, that is leading us to the brink of nuclear war."

Taylor's prediction mirrors that of Tom Zawistowski, president of We the People Convention, who tells AFN:

"If anything, you have to question why more people aren't doing this – don't you think?" he states. "For instance, you're seeing in Texas there are some Democrats … who are coming out and saying 'I can't live with this anymore.' So that's good. But we need more people [to follow suit]. This isn't politics – this is destruction of our way of life."

Gabbard's announcement, however, didn't seem to be a big deal to the liberal media. As Tim Graham of Media Research Center points out, a few stories appeared in those news outlets, but they all seemed to downplay the move – talking, for example, about how much like the Republicans she is becoming.

Gabbard hasn't talked about joining the GOP, but she is a Fox News contributor and frequent critic of President Joe Biden and the Democratic Party.

"On some level it fits sort of the way Republicans feel about the CNN Republicans. Was she a 'Democrat in name only' and now she's not?" he wonders.

Graham argues that Gabbard is to Democrats what Congresswoman Liz Cheney (R-Wyoming) is to Republicans … with one big exception.

"I think there are parallels to Liz Cheney, except obviously she – at least at the moment – is still in the House and has been able to be sort of a heroine for the liberal media," he tells AFN.

That, however, will come to an end in January: Cheney was trounced in her August primary bid to run again as Wyoming's sole representative in the House of Representatives.

With four weeks to go until the midterm elections, when it’s likely voters will give the Republican Party control of the U.S. House, the fate of the 50-50 Senate is much less certain because of numerous close races across the country.