Subscribe
Democrats demonstrate, again, how much they revere abortion

Democrats demonstrate, again, how much they revere abortion

After abortion-supporting Democrats in Congress refused to condemn arson and vandalism of churches and pro-life pregnancy centers, the leader of a pregnancy center hit by arson says their hatred is obvious.

The resolution was introduced by U.S. Rep. Mike Johnson, a Republican lawmaker from Louisiana. 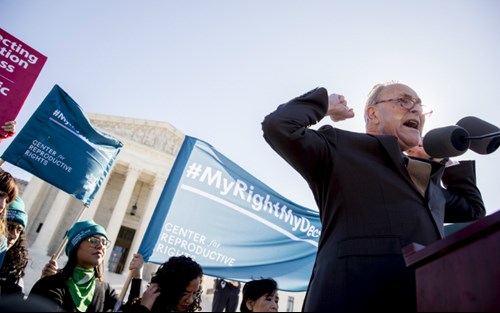 In its story about the blocked resolution, LifeNews.com pointed out that its own updated list of such attacks numbers more than 100 nationwide. Those attacks began just hours after a draft opinion overturning Roe was leaked in May.

Jim Harden oversees a chain of CompassCare centers in New York state, including one in Buffalo that was firebombed. He tells AFN the same Democrats who refused to condemn the attacks are also accusing the centers of fraud for allegedly hiding their beliefs from the pregnant women who enter the facility.

AFN has reported that centers such as CompassCare state openly and plainly on their websites that they oppose abortion.

So Harden says the real fraud is being perpetrated by abortion-supporting politicians who can’t condemn violence that meets the definition of a terrorist attack.

“Their job, the job of government,” Harden says, “is to protect all people equally, especially those that differ with them, if you want to maintain a civilized order.”

Democrats have demonstrated since the draft leak in May, however, that abortion is a reverent-like right and Roe v Wade is their sacred-like writings. So the pregnancy centers are now the target of a bill in the U.S. Senate at the same time they’re being attacked.

The anger over Roe being overturned was demonstrated when House Speaker Nancy Pelosi, after finally being asked by a Capitol Hill reporter about the string of attacks, defended abortion instead.

“Let me just say this: a woman has a right to choose, to live up to her responsibility,” Pelosi unhappily replied.

A bill in the U.S. House to increase security for the Supreme Court justices passed last month after Pelosi refused for weeks to bring it to the floor for a vote. A total of 27 Democrats voted against it.

While Indiana has received good news on two laws that will impact the lives of preborn babies, a pro-life group in California has advice on how people can make a difference locally.