A box of aborted babies exposes more than late-term abortions

A stomach-churning incident in the nation’s capital has enraged the pro-life community, including lawmakers on Capitol Hill, after a pro-life group obtained the fetal remains of aborted babies outside an abortion clinic including five fetuses who were allegedly killed in late-term abortions.

The pro-life group Progressive Anti-Abortion Uprising announced days ago it obtained several medical waste boxes containing aborted babies that were being delivered to a medical waste company outside Washington Surgi-Clinic. In the boxes, among 110 mostly-destroyed first-trimester fetuses, the group says it also found five unborn, fully-developed babies who were allegedly killed in late stages of gestation.

Lila Rose, the pro-life activist who leads Live Action, photographed the five babies and posted the gruesome photos to Twitter (caution: photos are extremely graphic) for the public to see the babies that were allegedly killed at the hands of abortionist Dr. Cesare Santangelo.

Those photos, which are extremely unsettling, can be see here.

Terrisa Bukovinac, who leads Progressive Anti-Abortion Uprising, tells AFN that a male baby appears to be at least 30 weeks into gestation. It is known Santangelo does not use feticide, or destruction of the fetus itself, she says.

“And so, at this late gestational age, if there's no use of feticide and the baby's delivered whole,” Bukovinac stresses, “the chances of them surviving that abortion are extremely high.”

Among the other dead babies, a female fetus appears to be around 25 weeks gestation. That baby is missing her skull, which was crushed after the brains were suctioned out.

“Which is consistent with what we would expect to see,” she says, “in a partial-birth abortion.”

According to Rose’s social media post, a second female fetus found in the medical waste box was dismembered in the womb, and another unborn baby was found in the amniotic sack.

Reacting to the sickening photos, Rep. Chip Roy (R-Texas) told The Daily Wire the images are “chilling to the soul” but the public should not look away.

“They reveal the uncomfortable truth of abortion,” he said. “These are human beings – our fellow Americans.”

According to the Daily Wire story, Uprising is accusing Santangelo of violating federal law, in particular the Partial Birth Abortion Ban, but Rep. Roy told the Wire abortion is legal in D.C. up until birth because of the city’s pro-abortion, Democrat politicians.

According to the city’s police department, the Metropolitan Police, the abortions were conducted legally. Any investigation underway by authorities concerns how Uprising obtained the fetal remains from Curtis Bay Medical Waste Center and stored the remains in an apartment.

In fact, the horrific images and allegations of illegal abortions are being ignored by abortion-supporting national media: NPR published an eight-paragraph story this week that barely mentions the five fetuses but states twice that Uprising members were charged with federal crimes in 2020 when they protested at an abortion clinic.

The Washington Post and The New York Times published stories about Uprising obtaining the fetuses, too, and those news stories question if laws were broken when the pro-life activists walked away with the medical waste boxes.

Regardless of the media's spin, numerous members of Congress signed their name to an April 5 letter sent to Mayor Muriel Bowser and the city's police chief demanding an investigation. 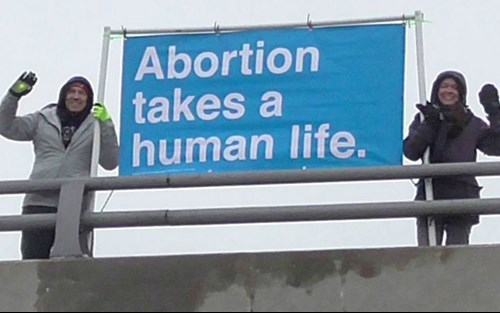 "Congress passed the Born Alive Infants Protection Act to provide equal protections for children who are born alive during an abortion," the letter states in part. "If the bodies of other babies who were not aborted were recovered in a similar fashion, it would be hard to imagine Metropolitan Police declining to conduct a thorough investigation into the death of each child."

After posting the horrific photos to Twitter, Rose was bombarded with online comments from abortion supporters. Some doubted the photos were authentic and others said the Uprising members were the real criminals. Other commenters said the pro-life activist could not be trusted because she is not a journalist.

"How about making it clear," another Twitter post reads, "that the fetuses were found in the home of an ANTICHOICE person."

In other online comments, some horrified Twitter users questioned how people can view the photos of fully developed babies then callously dismiss them and defend late-term abortion.

"So many comments on here are weak arguments and veiled yet obvious skepticism that shows you actually do find this horrific if true," one online comment reads, "and your conscience is screaming at you. Listen to it. Become pro-life. Stop trying to justify this. The truth will set you free."

Colorado’s governor has signed a pro-abortion bill that is alarming pro-lifers for opening up the already-liberal state to more late-term abortions and, incredibly, to growing accusations some states are excusing infanticide days and weeks after birth.