Schlapp gets slapped by Right for 'Lia's ability' comment

University of Pennsylvania swimmer Will Thomas (front row, center) is now swimming as "Lia" on the girls team as a transgender female. His decision was praised by conservative activist Matt Schlapp.

Well-known conservative activist Matt Schlapp is being slammed for online comments praising collegiate male swimmer Will Thomas, and one critic says the explanation could be a small but influential group called the Log Cabin Republicans.

Schlapp, who leads the American Conservative Union, was blasted on social media for a March 6 Twitter post in which he suggested Thomas “deserves our compassion,” Mediate reported.

“No matter what one thinks of Lia’s ability to swim with women,” Schlapp wrote, referring to the male student’s female name, “her story deserves our compassion.”

Reacting to the controversy, Rob Chambers of AFA Action says there is a distinction to be made between being compassionate and telling the truth.

“The Bible tells us that people have exchanged the truth for a lie. They're believing something that's not true,” he tells AFN. “And to say it's compassionate, to embrace a lie, is not biblical and it's not compassionate."

What is likely happening behind the scenes, Chambers advises, is Schlapp knows the national Republican Party is being influenced by the Log Cabins Republicans, the GOP homosexual lobbying group, and he is responding to that pressure because the group is involved in CPAC. 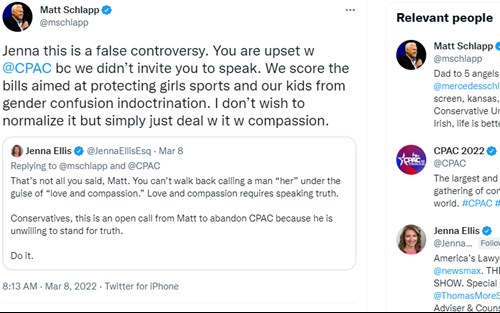 “And so Matt Schlapp is playing to that base,” Chambers says, “however small they may be."

During the pushback over his comments, Schlapp jumped into a Twitter debate (pictured at right) with attorney Jenna Ellis after she wrote, “It’s sad to see CPAC leadership and the GOP establishment cave to the LGBT agenda.”

“Jenna,” Schlapp replied, “all I am saying is in the end trans people deserve our love and compassion.”

Schlapp went on to suggest the Right should defend “girls sports” from competing against men but, he added, “remember that all people deserve respect. Kinda simple.”

Ellis wasn’t done, however, and pointed out that Schlapp had called the biological male “her” and was now demanding “love and compassion” for Thomas.

Schlapp then suggested Ellis was “upset” with CPAC because she was not invited to speak there.

Another flop in the making?

A pro-life organization sees what the nation's largest abortion provider is up to in Kansas and is working to expose what's going on.