The leader of the Republican National Committee is assembling a panel of prominent names to assess the lackluster midterm elections and an outspoken evangelical leader is among those who will be seated when that discussion happens.

Tony Perkins, who leads the Family Research Council, was asked last week to join the new Republican Party Advisory Council at the invitation of Ronna McDaniel, who is RNC chair.

In an interview with AFN, Perkins says he was chosen because the RNC recognizes the political party needs to include a “voice of the faith community” and in particular an evangelical leader.

“There are a lot of different viewpoints,” he says of the Republican Party, “but the party has made it very clear that they want to hear from Evangelicals who care about matters as it pertains to faith and our families and our freedom."

Perkins, 59, has led the Family Research Council since 2003. The organization’s headquarters in Washington, D.C. has given Perkins access to influential lawmakers and party leaders, who are frequent guests on his weekday “Washington Watch” radio program.

Numerous polls and pundits were predicting a bloodbath for Democrats and a so-called “red wave” for Republicans on Election Day, which did not happen. Republicans did win a majority in the U.S. House as predicted but several senate and gubernatorial races did not end as predicted, and now the political party finds itself in a finger-pointing phase.

McDaniel (pictured below), who formed the advisory committee, is also fighting behind the scenes to retain her post after the midterm elections. Potential rival Lee Zeldin has said she should step down but announced this week he will not challenge her, citing the difficulty of an outsider mounting a challenge. But attorney and RNC committee member Harmeet Dhillon has announced she will challenge McDaniel. 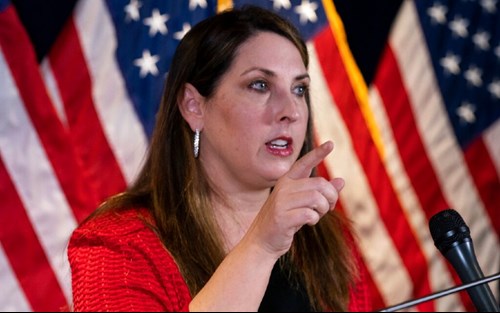 “Republicans are tired of losing, and I think that that we really need to radically reshape our leadership in order to win,” Dhillon told Fox News host Tucker Carlson on his program Tuesday night.

Reacting to the criticism, McDaniel has tallied her support among committee members and her re-election is likely, The Hill reported this week.

As far as what Evangelicals can do to influence politics, Perkins says they have to start voting in larger numbers to reflect that influence.

“It is one of our most basic ways that we influence the world around us,” he tells AFN. “And someone's viewpoint is going to shape the policies that we have to live with. Should it not be us?”

One of the 12 traitorous Republican senators who voted for the Respect for Marriage Act is finding a not-so-warm welcome back in her home state, where a conservative leader predicts Joni Ernst’s political future is up in the air after she rejected bedrock religious beliefs about marriage.