From purplish Pennsylvania to dark-blue Washington state, polls suggest Republicans are poised to win big on Election Day but numerous races could be decided by tiny margins.

In a stark election-eve analysis at CNN.com, the Democrat-defending news network describes a “nightmare scenario” in which Republicans have convinced voters the midterm election is a “referendum” on President Joe Biden.

“Hopes that Democrats could use the Supreme Court’s overturning of the right to an abortion and a flurry of legislative wins to stave off the classic midterm election rout of a party in power,” the political analysis warns, “are now a memory.”

A recent poll of likely voters shows similar results. In a survey of 1,000 likely voters, polling firm Rasmussen Reports reported 85% of Republicans and Democrats said they are “definitely” voting in the midterm elections. When those numbers are crisscrossed with Biden’s approval ratings, the pollster found, many more Republicans and Independents say they “strongly disapprove” and are headed to the polls to demonstrate their unhappiness.

"I predict that you're going to see a record number of blacks elected who are conservative," Horace Cooper, of Project 21, tells AFN.

In light of that prediction, Project 21 has released what it calls a "Blueprint" for black Americans. That blueprint covers everything from education and health care to taxes and employment.

Back in the CNN story, it describes a “swathe of blue territory” from New York to Washington state that Democrats are defending from GOP momentum. In one of those races, Washington Sen. Patty Murray is attempting to hang onto her seat and beat off a challenge by GOP candidate Tiffany Smiley.

Jameson Taylor, of AFA Action, says Murray’s situation mirrors many other Democrats who are attempting to fight off surprising challenges thanks to angry, disgusted voters.

“The state,” he says, “is poised to elect its first Republican senator since 1994.”

Washington’s senate race is considered a “toss-up” by RealClearPolitics, which predicts Murray will win because polls show her with a three-point lead over Smiley. 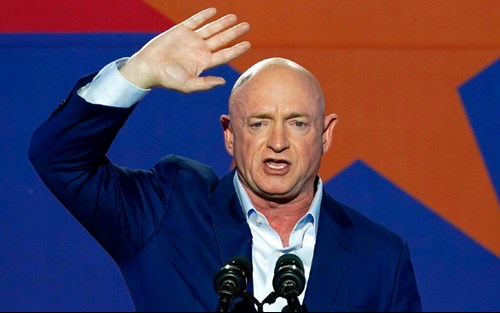 In a similar Democrat-held senate seat, Mark Kelly (pictured at right) is attempting to hold onto his Arizona seat and defeat challenger Blake Masters. AFN reported last week Masters has closed a polling gap and is within one percentage point of Kelly.

Cindy Dahlgren of the right-leaning Center for Arizona Policy Action tells AFN Kelly has positioned himself as a “moderate” Democrat in the far-left party, when his voting record shows he has voted with Biden and the party 94% of the time.

“And [Kelly] claims to be tough on the border,” Dahlgren says, “but he’s taken hundreds of thousands of dollars from a progressive organization that is funded by George Soros. And it wants to defund the police.”

There is no way to run from that record, Dahlgren says, which is why Masters has closed the gap with voters as they learn about Kelly’s record.

As the hours are now ticking down to Election Day, longtime conservative activist Gary Bauer says he is reading the same polls that everybody else it. But he has a warning about the “red wave” prediction.

“Nothing counts but the votes that are cast,” he says, referring to voter turnout. “And nothing matters but what the totals of those votes are.”

Those votes, he adds, must be counted honestly and fairly, too, which is questionable after 2020.

Editor's Note: This story has been updated with comments by Horace Cooper.

Oregonian says GOP 'red wave' could cover his state, too

The “red wave” that is expected to favor Republican candidates on Election Day could wash over Oregon, too, where voters might choose a Republican for governor after Democrats have left their once-great state in ruins after decades of one-party rule.