The undercover journalists at Project Veritas took their cameras to Arizona to demonstrate how U.S. Senator Mark Kelly is deceiving undecided voters about his liberal views before Election Day.

Kelly, the Democrat incumbent, is attempting to keep Republican challenger Blake Masters from flipping the seat to the Republican Party in a neck-and-neck race. Most polls show Masters is trailing Kelly in single digits, and the race likely got even tighter this week after Marc Victor, the Libertarian candidate, dropped out this and endorsed Masters.

Enter the notoriously sneaky Project Veritas, which sent a female reporter who posed as a Kelly volunteer. As that reporter canvassed homes for the Democrat senator, she managed to record an eye-opening conversation with Kelly campaign staffer Evynn Bronson over her boss’s strategy to woo undecided voters. At one point, Bronson says Kelly won’t “say anything outright” about his liberal beliefs during the campaign because his strategy is to appear to be a “bipartisan” senator who can work with both Republicans and Democrats.

“Why do you think he doesn’t just say them?” the Veritas reporter, referring to Kelly’s liberal policies, asks.

“He has to play both sides,” Bronson replies. “Forty percent of the people voting are undecided whether or not they’re going to vote Republican or Democrat.”

During the neighborhood walk, the Veritas reporter pressed Bronson over Sen. Kelly’s views on abortion when she knocks on doors and talks to voters.

“Okay, let's say they're like pro-life,” the Veritas reporter says, “and they, like, ask me if Mark Kelly is pro-life.” 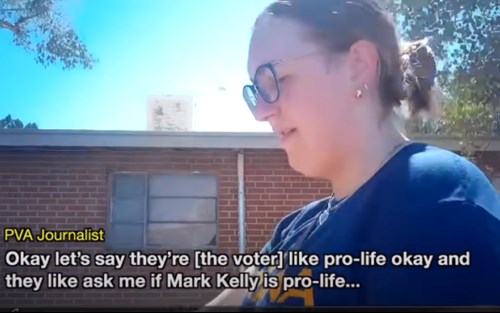 “Yes, I would say, I would say Mark Kelly is pro-life [and] also pro-keeping the government out of our health care.”

“Okay,” the reporter says, “even though he's not pro-life?”

As a senator, in fact, Kelly, co-sponsored the Women’s Health Protection Act, which would codify abortion in all 50 states. But the campaign staffer’s behind-the-scenes strategy is to keep voters in the dark about his pro-abortion stance.

Biden will beg Democrats to save 'democracy' in pre-election plea

With polls predicting American voters are planning a blistering rebuke against Democrats on Election Day next week, President Joe Biden is scheduled to speak tonight in a desperate attempt to beg his base to turn out and stop it.