There is a good chance New York’s liberal voters will unhappily re-elect Gov. Kathy Hochul to keep the Democrat-dominated state blue but her Republican opponent is making voters consider the consequences of giving Hochul a second term.

New York’s last Republican governor was George Pataki, who left office in 2006, and now U.S. Rep. Lee Zeldin is making headlines for turning the gubernatorial contest into a horse race in the blue state, where Hochul holds a single-digit lead in polls. 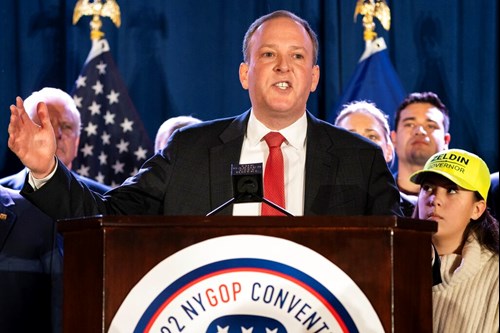 “My opponent,” Zeldin zinged Hochul during their Tuesday night debate, “thinks that right now there’s a polio emergency going on but there’s not a crime emergency.”

Democrats are being hammered across the country over soaring crime and runaway inflation, so Zeldin wisely hammered away at New York’s governor. “You’re poorer and less safe,” he told New Yorkers, “because of Kathy Hochul and extreme policies.”

In a post-debate story, The New York Post informed its readers Zeldin had blistered the governor for ignoring the crime issue during their debate to which Hochul amazingly responded, “I don’t know why that’s so important to you.”

Zeldin personally knows why crime is important to him: The congressman’s own Long Island home was crisscrossed with crime scene tape in October, when two people were shot nearby and his two teenage daughters hid in a closet after hearing the gunshots.

According to a Politico story, major crimes reported to New York City police have jumped 32% by October compared to 2021, though overall crime is lower than decades past.

Analyzing the New York governor’s race, Jameson Taylor of AFA Action says Democrat voters there are being challenged to support the party whose policies are being blamed for surging crime, and increasing gas and grocery prices.

“The status quote is clearly not working for New York,” he tells AFN. “New York leads the country in population loss.”

Among the state’s registered voters, Taylor says, independents outnumber registered Republicans. That means Zeldin must appeal to them if he stands a chance to defeat Hochul on Election Day.

According to RealClearPolitics, Hochul is holding a 6% average over Zeldin in polling but the race is categorized a “toss-up” as Election Day nears.

For its poll analysis and the 6% average, RCP went back to 13 polls conducted since June. The bad news for the Zeldin campaign is Hochul leads him in every poll, one by as much as 24%, but the good news is he has closed the gap dramatically over the summer to shrink the average to single digits.

According to a New York Post story, which published before the Tuesday night debate, a poll of 1,056 likely voters showed Zeldin and Hochul tied 45%-45%. Farther down in the numbers, Zeldin was beating Hochul among independents 47%-38%.

An expert on the United Kingdom and its parliamentary politics predicts the Conservative Party is headed for defeat after a new leader took over parliament’s key leadership role this week.