A pollster and his organization are predicting voters could deliver some key wins for Republican candidates in the purplish state of Arizona.

On the ballot, wins for Republicans would mean Kari Lake could win the governor’s race over Katie Hobbs, and Blake Masters could win the U.S. Senate seat currently held by Democrat Mark Kelly.

“Weeks ago, when we said it was a couple three points, everybody said that was insane,” Cahaly said. “And now you've got even CBS confirming that in their most recent poll."

According to poll-watching website RealClearPolitics, Kelly has led Masters in every poll going back to late summer, but the challenger has never trailed the incumbent Democrat by double digits in any poll. The “RCP Average” gives Kelly a 4.5% lead over Masters, 49.3%-44.8%, four weeks before Election Day. 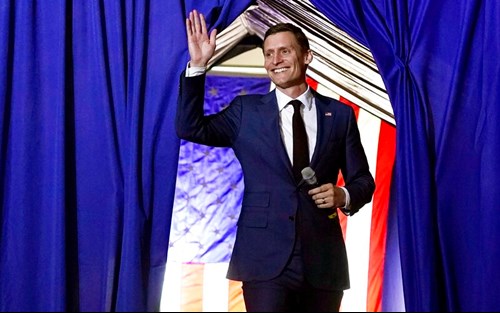 The political website predicts Kelly will keep his seat.

In the gubernatorial race, RealClearPolitics averaged six polls that give Lake a narrow lead of less than one percent. Lake is projected to win, however, by 2.9% over Hobbs, RCP, predicts.

Mirroring that prediction, Cahaly said political analysts are in agreement Lake appears to be the next governor which he says may help Masters, too.

“There’s a very good chance that her popularity, and Masters' unique approach,” the pollster said, “is catching on and he keeps tightening that race.”

'Moderate' Democrat 'carpet bombed' with his record in debate