Subscribe
If plan is to corner Trump, walls not closing in after Mar-a-Lago raid

If plan is to corner Trump, walls not closing in after Mar-a-Lago raid

A conservative columnist says last weekend's FBI raid at Donald Trump's home was about much more than thuggish politics before midterm elections: The Biden administration wants to intimidate Republicans and energize Democrats before Election Day.

On Friday, documents unsealed by a court revealed FBI agents took 20 boxes of items, including some marked sensitive and top secret, from Mar-a-Lago. Possession of such documents could be a violation of federal law, and now Trump-hating Democrats are eagerly expecting him to head to prison, but the former president and his attorneys insist the items were declassified and allege private documents were taken, too. 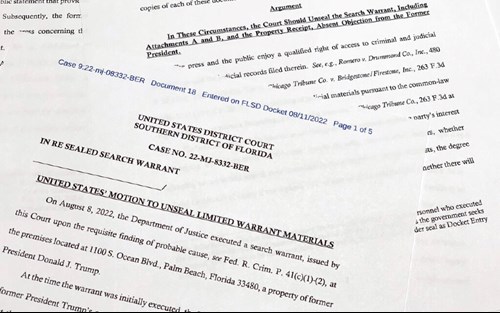 Trump’s supporters and his enemies seemingly agree on one thing – it was unprecedented for the FBI to serve a warrant on a former president – but Americans are split over the motive. Democrats are defending the FBI and are claiming it was forced to take action because of national security, and Republicans see a nakedly and desperate attempt to hurt Trump politically before he could announce a 2024 run for the White House.

Robert Knight, a columnist for The Washington Times, tells AFN the FBI raid was “over the top” even for the Trump-hating Biden administration, and he predicts it will help – not hurt – Donald Trump.

“I don't think Trump will be imprisoned,” he says. “This whole thing is about intimidation. Of course, Donald Trump is never intimidated but there are people who support him who might be.”

And that, he adds, is the real target: American citizens who oppose what he calls the “left-wing cabal” that is behind President Joe Biden.

There is some precedent behind that warning: Democrats and the left-wing media repeatedly suggested the only way a "racist" and "white supremacist" like Trump could get elected is if his supporters are evil, too.

Hillary Clinton's "basket of deplorables" remark summed up the Left's feelings about those voters before the 2016 election, and that hatred of Trump supporters has also grown worse.

The left-wing obsession with putting Donald Trump behind bars – “The beginning of the end!” and "The walls are closing in!" – has been a cable news topic for years, and that hope was resurrected immediately after the FBI raid. On the "Morning Joe" program on MSNBC, after the hosts excitedly predicted Trump's demise, the show went to commercial playing a song from the "Goodfellas" mobster movie.

Knight predicts not only will this latest effort fail again but it will backfire bigly with less than 90 days before Election Day.

“Right now I think more people are shocked by this overreach,” he insists. “And even moderate Republicans may be inclined to get behind Donald Trump if for no other reason than to send a message to a tyrannical government that this has to stop."

Immediately after the raid, a Trafalgar poll showed a whopping 84% of Republican voters and 72% of Independents said the raid made them more likely to vote in the 2022 midterms, AFN reported last week.

The beginning of a pattern?

A political scientist predicts Kansas's recent vote on a constitutional amendment on abortion will have a ripple effect in other states.