A court fight over redistricting in Ohio will likely postpone a May primary, says a Republican congressional candidate whose name is on the ballot.

After the Ohio Supreme Court struck down the GOP-drawn boundary lines this week, it marked the third time the plans have been rejected by the state court.

Republican lawmakers, however, have accused suing Democrats of goalpost-moving after they demanded changes which were made only to demand more, newspaper The Columbus Dispatch reported. Two dissenting justices also accused the majority of engaging in "raw political power."

Janet Folger Porter (pictured below), who is running in the Republican primary for Ohio's 13th Congressional District seat, tells AFN it’s “anybody’s guess” at this point what the final, approved districts will look like. 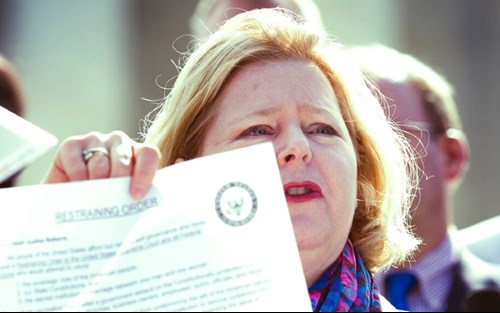 “But it's looking more and more that Election Day, which is scheduled for May the third,” she says, “is going to be postponed."

That prediction mirrors the news from the Dispatch. It said the Supreme Court’s ruling was “ending any hope” of a May 3 primary for congressional races and statewide races.

Other GOP candidates running for the 13th District seat are Max Miller, a former White House aide in the Trump administration; Shay Hawkins and Jonah Schulz. In the Democrat primary, Emilia Sykes has filed to run. She is a former Minority Leader of the Ohio House of Representatives.

Porter says the state court is demanding a map that favors Democrats but insists there will be a “red wave” in Ohio in the fall, regardless of a final boundary map, because Ohioans are “fed up” enough to vote in a party primary.

"I believe Ohio is going to go deep red,” she predicts.

Regarding the 4-3 court ruling, Porter says Chief Justice Maureen O'Connor, a Republican, deserves to be voted out by voters after siding with Democrats again and again.

"Maureen O'Connor is a Republican who's voting like a Democrat," Porter complains, "and that's really the heart of the issue."

The radio audience on American Family Radio heard a first-hand account of Donald Trump and the “Swamp” that opposed him thanks to someone who was in the Oval Office and witnessed it.