Subscribe
Americans draw inspiration from Canadian truckers; and some 'withdraw'

Americans draw inspiration from Canadian truckers; and some 'withdraw'

A conservative pundit and political analyst is sending a message to Canadian Prime Minister Justin Trudeau that he's paying a price for his actions against citizens who peacefully protest against the government.

Prime Minister Justin Trudeau, who many Canadians accused him of acting more like a dictator, has put an end to the three-week peaceful protest in downtown Ottawa by truckers who want an end to Trudeau's COVID mandates. Trudeau sent in police to forcibly remove the demonstrators, injuring several individuals who were run over by officers on horseback.

Richard Viguerie is chairman of ConservativeHQ, which is headquartered in Manassas, Virginia. He took swift action to support the Canadian truckers after Trudeau – under his Emergencies Act – decided to freeze truckers' personal and corporate bank accounts and compel tow truck companies to haul away vehicles.

"Our company uses a Canadian bank [TD Bank] – and I think it's important to let them know we want to withdraw our money from the bank and let the prime minister know that he's paying a price," Viguerie tells AFN. "They're quick to strike out at conservatives when they raise their head and express themselves – and it's time for conservatives to do the same."

Viguerie finds satisfaction in knowing the truckers' actions outside the Canadian Parliament are being noticed.

"It means Americans are waking up and Canadians are waking up – and you see it with the Democrats' poll numbers crashing," he contends. "So, the more that people speak out against mask mandates and one thing or another, the more the establishment will dig their heels in … and that's good. That means [conservatives are] finally going to be fighting for their freedoms here."

It's time, says Viguerie, for all American patriots to become modern-day Paul Reveres and "spread the word" – because, as he says, they have been silent too long. 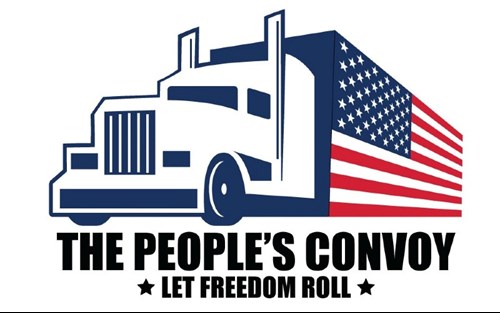 Mike Landis is one of the organizers for The People's Convoy. On a video posted on their official website, he says it's all about individuals' freedoms.

"The mandates are bad, obviously, [and] not many people like them. So, this is for the people – hence the name The People's Convoy," Landis states. "The fact [is] we have a government that tries to push us around and not follow the Constitution …."

"I really do think using peaceful means to express our concerns and to give voice to the fact that we want to defend our freedoms are extremely important. So, I'm grateful for what [The People's Convoy] is doing and I would encourage you to support them. These are peaceful means. They're not burning cities like some groups were in the summer of 2020 – they're simply driving on the public roads, making a statement that freedom matters." (Tony Perkins, president of Family Research Council)

The goal of The People's Convoy, then, is to petition the government to bring back the Constitution by ending the Emergency Powers Act. "And then those who were a part of this whole scheme need to be held accountable per the way of the Constitution for their actions and the people who died as a result of it," Landis adds.

"We the people want our country back – the one that we love – because that's who we are, what we are, and what we want to continue to be. We do not want to be under a dictatorship communism-style regime where we are right now."

The main convoy is set to leave northern California today (February 23) on I-40 East and is scheduled to arrive in the DC beltway area on March 5, though it won't be going into DC proper.

Next week another convoy called The American Truckers Freedom will depart from Fresno, California, and take a southern route along I-10 East. During an appearance on American Family Radio, Ron Armstrong, president of Stand Up Michigan and a spokesman for this convoy, said the Constitution protects the people's right to assemble.

"Whenever any form of government becomes destructive to its ends, it is the right of the people to alter or abolish it," Armstrong stated on air. "We're not saying we need to abolish it – we're saying we need to uphold the laws and the rights that are given to us in the Constitution. And we need our legislators and … our courts [and] our individuals to all stand together peacefully."

Armstrong argues that implementation of the Emergency Powers Act is giving unilateral tyrannical powers to governors and to the Biden administration.

"My feeling is that [our convoy] needs to simply light the lantern of freedom that is going to demonstrate to the government that the people are in control of America," he added.

Several other routes and events are described on the website for American Truckers Freedom.

Can Trudeau keep his upper hand?

A pro-family activist says there is a growing dissatisfaction among Canadians with the prime minister as he continues to stomp on the rights of citizens who are protesting the government's oppressive COVID mandates.