President Joe Biden promised “equity” for minorities on his first day in the White House but black conservatives say a related pledge by the Environmental Protection Agency to help them will only make things worse for the poor and middle class.

The powerful federal agency, created in 1970 to protect the environment from polluters, announced in February it is making “environmental justice” a strategic goal moving forward because the EPA has a history of dismissing legitimate concerns from minority communities harmed by pollution, The Associated Press reported at the time.

That announcement got the attention of Project 21, which used a public comment period to suggest the federal government and its “unaccountable elites and bureaucratic minions” will make things worse for the minorities they are promising to help.

The posted comment from Project 21 can be read here.

"(There's) no evidence that in the past 40 years environmental policy has been targeting black America,” Project 21 spokesman Horace Cooper tells American Family News, “(but) lots of reason to believe that these new policies will do the very thing.”

Beyond Project 21’s general description of a bloated and wasteful federal agency, the example cited in the AP story says the EPA ignored complaints about ash from a landfill located near a black-majority Alabama town. The black residents complained to the EPA in 2013, the second year in the second term of Barack Obama, the first black president.

The complaint took five years to resolve and was concluded with a dismissal in 2018, the AP said.

Earlier this year, Project 21 addressed another environment-related issue from the Biden administration regarding the “social cost” of carbon, methane, and nitrous oxide. In a two-page public comment posted in May, Project 21 leader Derrick Hollie pointed out he lived during the 1960s when environmental activists predicted mankind was in danger from a weakened ozone, an ice age, acid rain, global warming, and even killer bees.

“If the predictions of the environmental experts and their models over the course of my life were true,” Hollie wrote, “I’d be dead.”

Cooper tells AFN that federal environmental policies create more expenses and unneeded regulations that harm poor and middle-class blacks. For example, the forecast that we are entering an especially cold winter, he says, means those families could struggle to bills to stay warm in their homes.

That real-life harm is happening right now at the gas pump where regular gas is averaging $3.41 a gallon. A gallon of regular averaged $2.12 a year ago. 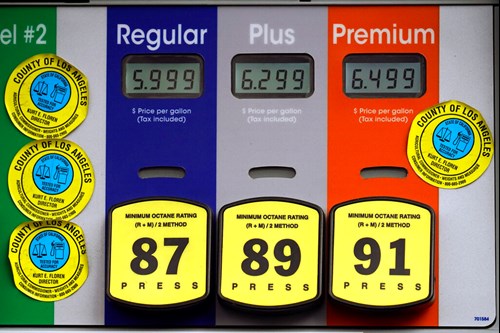 Despite that jump in gas prices and its effect on Americans, the White House has all but declared war on fossil fuels in the name of saving humanity from climate change.

“Our view,” White House press secretary Jen Psaki told reporters last week, “is that the rise in gas prices, over the long term, makes an even stronger case for doubling down our investment and our focus on clean energy options.”

A behind-the-scenes battle is brewing over who will take the place of Joe Biden in 2024, a swap that could be months and not years from now, and current news stories suggest the knives are out for Vice President Kamala Harris.