A congressman used a Capitol Hill hearing last week to grill the the U.S. attorney general about an interesting fact: It sure is interesting that a prominent Oath Keeper leader who urged others to storm the U.S. Capitol on Jan. 6 has yet to be arrested and charged for participating in the so-called “insurrection” against the federal government.

At the Oct. 22 hearing with Attorney General Merrick Garland, U.S. Rep. Thomas Massie (R-Kentucky)  used video footage of Ray Epps at the U.S. Capitol to directly ask the country's top law enforcement official if the FBI has not arrested Epps because he is their guy.

“As far as we can find, this individual has not been charged with anything,” Massie, referring to Epps, told the attorney general last week. “You said this is one of the most sweeping investigations in history."

“So, as I said at the outset,” Garland replied, “one of the norms of the Justice Department is to not comment on pending investigations and particularly not to comment about particular scenes or particular individuals.”

Yet the FBI and the U.S. Justice Dept. have repeatedly boasted publicly about the sweeping investigation that, to date, is creeping up on 700 people arrested so far after hundreds of FBI agents fanned out across the country. The federal government has not been shy about asking the public for help, either: An FBI website dedicated to “U.S. Capitol Violence” asks the public to study captured images from video footage to identify hundreds of suspects dressed in MAGA hats and carrying “Trump 2020” flags.

That plan has worked, too, and many of those arrested were turned in by co-workers, neighbors, and even family members. 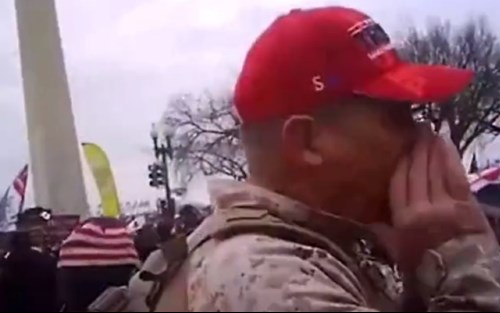 To track down the rioters, the federal government combed through hundreds of hours of video footage from security cameras and homemade Facebook videos to isolate and identify those alleged insurrectionists. One person who is featured in such footage, over and over, is Epps (pictured at left) who is seen urging others to attack the U.S. Capitol.

In the video clip (pictured at top) shown by the Massie, Epps is seen on the night of Jan. 5 telling a crowd of Trump supporters to storm the Capitol but that fiery plan is immediately dismissed by the crowd.

Regarding the “norms” of the FBI, it’s not a conspiracy theory to suggest the federal agency has penetrated the patriotic Oath Keepers group, where Epps led a chapter in Arizona. It was alleged in late January that Proud Boys leader Enrique Tarrio has cooperated with FBI agents for years after he was arrested by law enforcement agents in 2012. 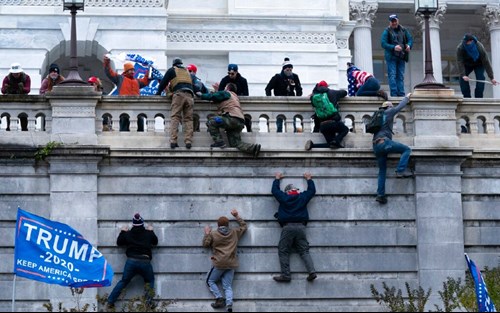 Reuters, the wire service, appeared to publicize Tarrio's work with the Feds in an exclusive Jan. 27 story after it obtained court records that documented his undercover work as a civilian to help the agency investigate and arrest drug dealers, shut down a gambling ring, and stop a fraud case.

The presence of Oath Keepers members and Proud Boys members at the U.S. Capitol on Jan. 6 has been featured in numerous news stories since both groups bolster the left-wing claim that terrorist-like “extremist” groups posed a danger that day.

Five members of the Proud Boys have been charged with rioting but Enrique was arrested with rifle magazines two days earlier and ordered by a judge to leave the city, Reuters reported.

At last week’s hearing, Massie told Garland the attorney general could “put to rest” concerns that FBI agents, or informants cooperating with the FBI, were mixed with Trump supporters on Jan. 5 and Jan. 6.

Reacting to that exchange, AFR radio host Sandy Rios says it is fair to ask if the FBI planted people to urge others to enter the U.S. Capitol.

"That's exactly what Congressman Massie was asking Merrick Garland about," she tells American Family News. "And Merrick Garland, of course, pretended as if he knew nothing about it."

Democrats have described the Capitol Hill violence as a right-wing assault on our fragile democracy and have been making political hay ever since. Fences and razor wire went up to protect lawmakers, and National Guard troops were marched into Washington, D.C. to protect them, too. The riot was also used by Democrats to impeach Donald Trump a second time, with some angry Republican lawmakers joining Democrats to do so, and Democrats also used the riot to blame GOP lawmakers and vow to punish them, too. 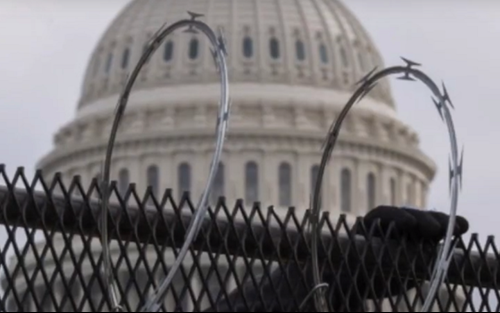 More recently, a controversial House committee has been formed by the Democrat majority to investigate the Jan. 6 riot. Democrats are vowing to haul prominent names before them to demand answers.

Immediately after the riot, federal prosecutors assured the national media that rioters would be charged with murder and sedition, but American Family News reported in August that promise has fizzled after the FBI found “scant evidence” of a grand conspiracy and criminal plot.

Reuters, citing four law enforcement sources, reported in late summer that federal agents concluded two prominent groups cooperated on Jan. 6 but did not work to overthrow the government. Those two groups were Oath Keepers and Proud Boys, the article said.

Is the VP violating federal law?

The legality of Kamala Harris's endorsement video for Terry McAuliffe continues to have people talking.