CA split over 'Yes' on recall but Elder leads replacements

Larry Elder, a native Californian and conservative talk-show host, is leading in polls among voters who want to recall Gov. Gavin Newsom.

What was once unthinkable in Democrat-dominated California is now within reach: Voters there could boot their despised governor and replace him with a well-known Republican.

Poll numbers from California show first-term Gov. Gavin Newsom could still win over voters in the Sept. 14 recall election, which means they will choose “No” to booting him from office, but an almost-equal number plan to mark “Yes” on the ballot. That means those voters will then choose from 46 names on the ballot that range from obscure candidates to well-known names with statewide recognition.

One name that is standing out is talk show host Larry Elder, the 69-year-old native Californian. He is considered the front-runner to replace Newsom if you believe the poll numbers and the this-can’t-be-happening headlines from the liberal news media.

Brad Dacus of Pacific Justice Institute says Elder currently has a better-than average-chance of moving from a radio studio to the governor's mansion.

“He has more support in the polls,” Dacus says of Elder, “than the next three candidates combined.” 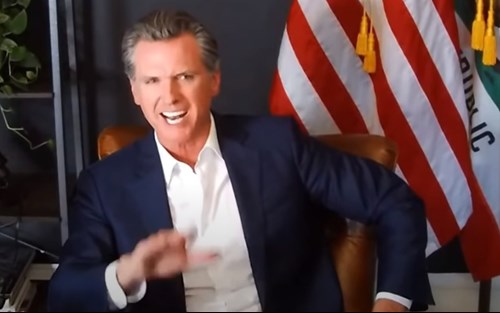 American Family News reported in an Aug. 12 story that Elder ran second behind Democrat Kevin Paffrath in a poll done by the San Diego Tribune. As Dacus points out, the GOP talk show host outpolled three other well-known candidates in a UC Berkely poll done in late July. In that poll, among voters who were decided, Elder led with 18% but a whopping 40% of voters said they were undecided.

Among the many Californians who are visualizing a Governor-elect Elder is Newsom himself. In a taped video interview, the incumbent governor (pictured at right) angrily cursed, slapped his desk, and wagged his finger to newspaper reporters while insisting he cares about “blue-collar jobs” and “workin’ folks” in California, where the pandemic-related lockdown threw an estimated 3 million Californians out of work and shuttered 20,000 businesses.

California voters who witnessed Newsom’s tantrum, including millions impacted by the state’s strict lockdowns, already know the wealthy politician secretly attended a birthday party last fall at a swanky Napa Valley restaurant despite strict lockdown orders imposed by the governor himself. When photos surfaced of the dinner, the governor issued a lie-filled apology, the California Globe reported.

A key issue on ballot: education

Beyond the issue of Newsom being a wealthy, lying hypocrite, Dacus says millions of Californian families are concerned about another issue, education, because many are sickened and frustrated by the left-wing dogma imposed on their children in the state’s public schools.

Elder would put an end to that, Dacus says.

In fact, Elder’s candidacy has been endorsed by a prominent Democrat and former state legislator, Gloria Romero, who is a staunch advocate for school choice.

“I believe in charter schools and school choice,” Romero, once the senate majority leader, says in a political TV ad released this week. “So does Larry Elder, but not Gavin Newsom.”

In the ad, Romero then goes for the political kill: She reminds voters that public schools across the state were still shut down last fall while the governor’s own children attended a private academy that had reopened.

“California will look like a state,” Dacus predicts, “that has a second chance to make a major turnaround for freedom, for liberty, for school choice.”

Trump stumped for Brooks but crowd showed up for him

Tens of thousands braved stormy weather to see and hear Donald Trump over the weekend, which suggests the former president remains a leader in the Republican Party despite opposition from party insiders, a political activist says.