A college student group that knows firsthand how the Left stifles conservative views on campus has found some free speech advocates on Capitol Hill.

Young America’s Foundation announced in June that Republican lawmakers Rep. Jim Jordan and Rep. Kat Cammack have formed the Campus Free Speech Caucus in Congress, with the goal of communicating with YAF to hear reports of bias against conservative views.

"The First Amendment is under attack on campuses across the country," Jordan said in a statement. "Every day, students and faculty are forced to self-censor out of fear that they will be 'canceled' by the mob.”

Right-leaning college students have experienced that climate for generations going back to when left-wing professors warned about that “cowboy” Ronald Reagan and the “warmonger” George W. Bush. More recently, however, right-wing students who sat through tirades about Donald Trump have also witnessed a shift over the right to differ. Now, on many campuses, conservative views are not only wrong but not allowed in the classroom, the college newspaper, or on the university campus itself.

According to the Left, all such censorship is done, ironically enough, in the name of tolerance. 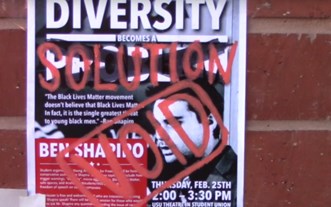 YAF itself has stirred up college campuses by welcoming writer-speaker Ben Shapiro. A six-campus tour in 2019 included accusations Loyola Marymount University dragged its feet until finally allowing Shapiro to speak, and faith-based Grand Canyon University refused to allow Shapiro because his appearance would be “divisive” on the campus. GCU eventually caved, too.

YAF spokesperson Kara Zupkus tells One News Now that free speech should not be a partisan issue.

“Free speech is something that should concern everyone because if one person's free speech is being infringed upon, then anyone's really can be,” she says. “So, regardless of where your ideological leanings are, if free speech and constitutional rights are being violated on campuses, that really opens the door for anyone's rights to be trampled on."

Biden's newest reversal of Trump a brazen 'slap in face'

A program created by the Trump administration to assist crime victims has not only been abandoned by the Biden administration but the new purpose will be to assist illegal aliens who report crimes against them.