Attorney: Capitol rioters being detained like terrorists – only worse

Some of the rioters who breached the U.S. Capitol on January 6 are still being held by DC police – and in the words of the attorney representing one of them, they're being treated worse than the terrorists held at Guantanamo Bay.

As reported on Wednesday, federal prosecutors have dropped the criminal case against Christopher M. Kelly, a New York man who was accused of participating in the riot at the U.S. Capitol on January 6. It appears to be the first such move by the Justice Department in its sprawling prosecution of those involved in the breach.

The DC police aren't saying exactly how many of the rioters they have in custody – but in April, it was about 40. Among those is Richard Barnett, the man who was pictured putting his feet on House Speaker Nancy Pelosi's desk that day. Barnett's attorney, Joseph McBride, tells One News Now the DC police are dropping the hammer on the rioters.

One top of that, they're in solitary confinement 23-24 hours a day, he says. 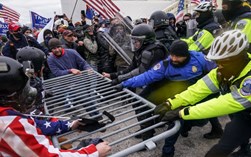 McBride argues that those being held for the Capitol breach would be treated better if they were radical Islamic terrorists. "The DC detention facility has become the Guantanamo Bay for American citizens, where people who have not been convicted are detained pre-trial for what feels like in perpetuity," he adds.

According to the attorney, individuals who were unaware the trespassers were being held in these conditions can blame the mainstream media – which won't cover the story.

"An entire conglomerate of media outlets will get behind your being thrown in jail and say that you need to stay there forever," he emphasizes. "It feels fundamentally wrong."

And he says Americans' right to openly disagree with the government is in peril: "It feels like not only are our actions policed, our thoughts are policed, [and] our words are policed – [but] if you speak out against the accepted narrative, you can be thrown in jail."

The dismissal of charges against Kelly was disclosed in a court filing Wednesday. The filing doesn't elaborate on the decision, and the Department of Justice refused to provide more information.

While charges against Kelly were dismissed, a Florida man who carried a Trump flag into the Capitol on January 6 yesterday pleaded guilty to one felony count. Paul Allard Hodgkins didn't enter a cooperation deal with prosecutors, and he's not accused of any other wrongdoing on that day.

Democratic lawmakers in Texas are grandstanding over a Senate election bill that is poised to become state law, says a veteran of conservative politics, and her advice to Republicans is ignore the accusations and protect election integrity.