Subscribe
Now a Democrat governor is sending illegal aliens to NYC, too

Now a Democrat governor is sending illegal aliens to NYC, too

Colorado's governor, Democrat Jared Polis, surprised New York City officials by announcing "migrants" are being transported from his state to the Big Apple.

During the final two years of Joe Biden’s term, a legal scholar predicts the political and legal fight over U.S. border security will be fought at the state level by defiant and determined governors in both red and blue states.

As soon as Biden landed in El Paso this week for his belated and highly-scripted border visit, Gov. Greg Abbott was waiting for him. The governor handed the president a letter that described “chaos” at the border and said it is the “direct result” of Biden’s failure to enforce federal immigration laws. It also lists five ways to improve border security.

“Your visit to our southern border with Mexico today,” the letter begins, “is $20 billion too little and two years too late.”

George Fishman, senior legal fellow at the Center for Immigration Studies, tells AFN he has read Abbott’s one-page letter. It is “dead-on right,” he says, about what the Biden administration must do to address the porous U.S.-Mexico border. 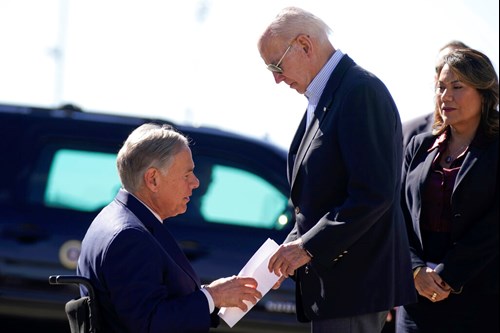 “And I certainly hope that the president reads the letter,” Fishman says. “It wouldn't take him more than a minute."

During the border tour, Biden took the letter out of his jacket pocket and told reporters, “I haven’t read it yet.”

Even if Biden does read the letter, it's doubtful Biden will suddenly crack down on illegal immigration. That's because the American public learned in November that Democrats are allowing the southern border and U.S. cities to be overwhelmed because the “solution” to that supposed chaos is to create millions of new U.S. citizens from Central America and South America.

“The only way we’re going to have a great future in America is if we welcome and embrace immigrants, the Dreamers, and all of them,” Sen. Chuck Schumer revealingly told reporters just two months ago, “because our ultimate goal is to help the Dreamers but to get a path to citizenship for all 11 million or however many undocumented there are here.”

Biden bragged about rolling back Trump-era executive orders on his first days in the Oval Office, and he visited the border only after political pressure to do so amidst a record-breaking flood of illegals.

Elsewhere in the letter, Abbott rips Biden for avoiding border areas that are flooded with illegal aliens and he points out the El Paso visit came after the city was “sanitized” of migrant camps that had “overrun” the downtown area.

Some red-state governors such as Abbott and Ron DeSantis have gone on the offensive by sending illegal aliens by bus and by plane to Democrat-controlled areas, including New York City, Chicago, Washington, D.C., and super-wealthy Martha’s Vineyard. And now a Democrat governor, Jared Polis, has joined them – sort of.

In a January 3 announcement, Gov. Polis announced the state government, the City of Denver, and non-profit groups have partnered to help “migrants” reach their final destinations by processing and transporting them. Most of them have a final destination that does not include remaining in Colorado, the governor also claimed.

That surprise announcement was denounced by New York City’s mayor, Eric Adams, who revealed Colorado’s  plan in a radio interview with WABC.

“We received over 30,000 asylum seekers that are in need of not only shelter, but food, education for children, health care and some of the basic items that are needed,” Adams complained. “Now, we were notified yesterday that the governor of Colorado has now stated that they are going to be sending migrants to places like New York and Chicago.”

Back in his announcement, Gov. Polis appeared to attempt to describe his plan in humane terms compared to red-state Republican governors. “No one should play politics with the lives of migrants who came here to escape oppression,” Polis said, “and in Colorado, we are honoring our values of treating people with dignity and respect.”

Farther down, in the same paragraph, the Democrat echoed the complaints of red-state governors: States and cities “cannot continue to bear their burden alone,” so Congress should vote for work permits, and enact better border security and immigration reform, the governor wrote.

According to Sen. Schumer’s own words, however, “immigration reform” really means citizenship for tens of millions of illegal aliens who are not being deported by order of the Biden administration.

Reacting to Biden's visit to El Paso, Texas-based conservative activist Cathie Adams says no American in any city, red or blue, believes the border is secure.

"They're going to be asking questions," she predicts, "and they are going to be understanding what's going on in their own backyards: We've got to border security."

This story has been updated with comments from Cathie Adams.

Moral courage and a higher standard. Those two ingredients could solve many of the past and current problems that service members are facing today, says a retired Air Force officer who also argues the military vaccine mandate was only a small part of a larger issue.