Moral courage and a higher standard. Those two ingredients could solve many of the past and current problems that service members are facing today, says a retired Air Force officer who also argues the military vaccine mandate was only a small part of a larger issue.

American Family News spoke to Lt. Gen. (Ret.) Rod Bishop who serves as chairman of Stand Together Against Racism and Radicalism in the Services, Inc. (STARRS). He admits that he lost friends over his stance in opposition to the COVID-19 vaccine mandate implemented by Secretary of Defense Lloyd Austin (pictured above) in August 2021.

Bishop tells AFN that he and his organization are neither anti-vax nor anti-mandate. "A mandate is for force protection and makes common sense," he explains. "[But] those elements have been missing with the COVID-19 mandate … for over a year."

The result, he warns, is that Austin's mandate "has inadvertently created or exacerbated a shortage in personnel in many career fields throughout the military – and it's affecting readiness in a big way."

For the thousands of service members who have been discharged – and for the many potential recruits who wanted to serve their country as well – Bishop contends the military is no longer an option. "The mandate has had a huge negative impact on readiness and morale caused by the loss of trust and confidence in their leadership among the rank and file," the 34-year Air Force veteran explains.

He admits he has lost track of how often service members have told him: "We did the research on the potentiality of harmful side effects, the law, Emergency Use Authorization, etcetera – and our leaders did not do the same."

For Bishop, that begs the question: "Was this a lack of morale courage by active-duty flag officers?"

"When a senior enlisted leader tells you The Coast Guard literally sucked our souls out, I tend to think there is a major problem with trust in leadership," Bishop shares. Instead of listening to concerns of the people they are leading and "having their backs," he argues, "flag officers apparently just went along to get along, seemingly focusing on their own careers rather than the lives, health and well-being of their subordinates and their families."

While passage of the 2023 National Defense Authorization Act (NDAA) may have halted the vaccine mandate, Bishop remains wary of those he says "didn't have the courage to stand up against it in the first place." He adds: "One has to wonder if they will lack the courage yet again when confronted with similar challenges in the future?"

Bishop argues that while the mandate may have been the correct course of action in August 2021, "there was ample evidence [by December 2021] that the military's senior leadership was intentionally denying, en masse, all religious accommodation requests." And to that end, he points out that five federal courts have characterized the denial of religious accommodation as illegal.

"[Considering] all the facts, the studies, and data about the harmful side effects of the COVID-19 vaccine that were well known by the end of 2021," Bishop says, "one has to ask: Where was the moral courage when these facts became known? Where were the military lawyers? Where was the military medical community?"

And according to the retired Air Force officer, leadership can't claim ignorance.

"Someone in a leadership position somewhere should have pushed back against the mandate or resigned before psychologically manipulating their own to take a shot they didn't want or need," he laments. And the same pushback, he adds, should have occurred before "breaking trust with some of those same men and women by blanketly denying all Religious Accommodation Requests. The First Amendment and Religious Freedom Restoration Act violations there are pretty obvious." 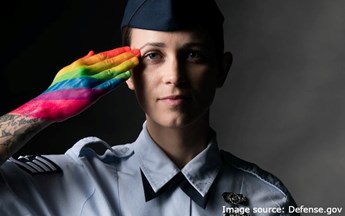 No room for indoctrination

Bishop is also troubled by the military's "culture." He tells AFN he's been told by Air Force Academy cadets that the culture is "changing underneath our feet."

"Those leading our military today have been insidiously indoctrinated throughout their lives and careers," he contends – brought on by a lot of experience that was political in nature. He explains that includes the vaccine mandate, transgender issues, overemphasis on Critical Race Theory (CRT), Diversity, Equity, and Inclusion (DEI), and more.

"Many leaders have bought into the leftist ideology – hook, line and sinker," he stresses. But according to the retired Air Force officer, "it's time for Americans to stand up and say: Enough – Focus on your mission."

"The military should remain aligned with our founding ideals and principles instead of cultural or societal trends or social experiments," he suggests. "Instead, lowering military standards in the name of diversity or equity has become commonplace."

The woke philosophies and policies in place today, Bishop concludes, are not working.

"What has made the military great over our history has been setting a bar higher than society; giving people an opportunity or vision to be part of something bigger than themselves [and to] aspire to those higher standards – and, of course, [having the] moral courage to always do the right thing."

Here's why believers are being booted from military: Bauer

Conservative activist Gary Bauer has a theory about why leftists who now control the U.S. military want to purge Christians from the ranks.