Hoekstra: War crimes a certainty whenever conflict in Ukraine ceases

Heavy fighting continues in Ukraine as Russia launches more attacks. As President Vladimir Putin presses on, the international community is watching and seeking a means for accountability when the war finally comes to an end.

On Monday, air raid sirens sounded across Ukraine as Russia launched a barrage of missiles at the country's capital, Kyiv, and multiple other cities.

As the war against Ukraine continues, there's a watchful eye on Russia. The International Criminal Court (ICC) in The Hague, Netherlands, is considered an intergovernmental organization and international tribunal that investigates some of the gravest crimes against the international community.

American Family News spoke to Pete Hoekstra, former U.S. ambassador to the Netherlands and former chair of the House Intelligence Committee. He confirms that, according to his sources at the ICC, "there are all kinds of actions that are going to be able to be consistently and appropriately labeled as war crimes committed by Russia."

Not only has the ICC recognized this fact, Hoekstra says the United Nations also has "people on the ground" who would agree. And the first step for both intergovernmental organizations to hold Russia accountable, he argues, is documenting the various atrocities they've witnessed.

"They are documenting cases of genocide, humanitarian crimes, and war crimes," says Hoekstra. He cites other examples – such as mass graves and evidence of torture and executions – that would potentially be used in criminal proceedings at the ICC.

"When this war comes to a close," he vows, "the ICC and U.N. will be ready to move forward."

But Hoekstra admits that's not always the most profitable solution. "If you think that you're going to see Vladimir Putin sitting as part of the docket in the Hague, think again," he says. "However, several other individuals could be sanctioned, subjecting them to arrest if they traveled to certain parts of the world, for example."

After such an arrest, the person would be transferred over to The Hague for prosecution. "That's most likely what you'll see develop once the war is over," he says, adding: "We can only hope Putin will be brought to his knees." 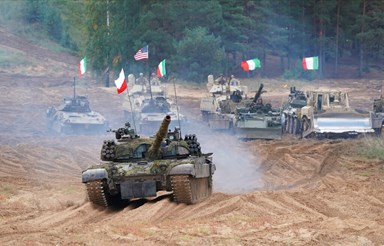 While Hoekstra admits he doesn't see a clear path forward in the war, he predicts "decreasing support among the public in Europe and in the U.S. for what is going on in Ukraine." In addition, he expects the enormous financial burden of the war is going to deter the public in the West from wanting to continue to offer their long-term support.

"Many in the West are already suffering enough hardships and difficulties, and their economies are already hurting enough," he shares, "[and there appears] no practical explanation on how this war will come to an end."

Still, Hoekstra argues, "from a conventional point of view about the war, Ukraine is doing pretty well. [But] Putin still has a lot of things in his arsenal that he has not used – [including] more sophisticated conventional weapons." Consequently, "Putin can up the ante at any time," he warns.

In addition, he points out that Russia could more aggressively target infrastructure through cyberwarfare.

"This could happen not only against Ukraine, but also against the West," he warns. "And it would be hard for the West to attribute it to who actually did it."

Intelligence once said Russia would be topple Kyiv in a few days, but the battle still rages on after nearly ten months. "Until there is more clarity," Hoekstra suggests, "there's only going to be parlor room talk from everybody who is trying to figure how this war will end."

National security expert Frank Gaffney is deeply concerned by the inroads China could be gaining through a wildly popular video app – and through personally owned drones from a manufacturer the Department of Defense has blacklisted.