After years of pleading for the federal government to put an end to runaway immigration, an immigration watchdog is watching with amusement as prominent Democrats openly and publicly complain that illegal aliens are flooding into their cities and creating havoc.

In the nation’s capital, at the famous Union Station, an estimated 4,000 illegals have stepped off one of 200 buses that have shipped them there from Texas and Arizona, according to an Associated Press story.

Responding to what she called a “growing humanitarian crisis” in Washington, D.C., Mayor Muriel Bowser (pictured below) last week asked the National Guard to help with processing the illegals and to help set up housing at the Guard’s own armory.

The city’s National Guard falls under the authority of the White House so the D.C. mayor met with White House officials to plead for help. 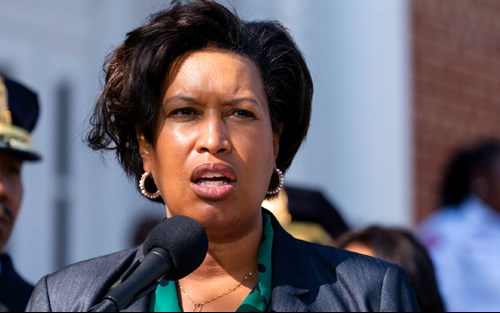 “It isn't a crisis until you're the one paying for it,” remarks Ira Mehlman of the Federation for American Immigration Reform, or FAIR.

The D.C.-based think tank lobbies for strict border enforcement and deportations. Ever since Joe Biden took office, however, now 1 ½ years ago, FAIR has watched the administration proudly reverse Donald Trump’s tough immigration policies after Democrats accused of him of xenophobia and racism.

AFN reported last week the U.S.-Mexico border is being overwhelmed with record-breaking numbers of illegals who will likely remain here thanks to the Biden administration.

Responding to the crushing numbers being allowed into the U.S. to stay, Texas Gov. Greg Abbott announced in April that illegals in the state will be offered a bus ticket to start a new life in other cities.

In New York City, a city that knows a thing or two about immigrants, Mayor Eric Adams recently complained the city’s homeless shelters are overflowing after approximately 3,000 illegals arrived. He blamed buses coming from Texas and Arizona but said the federal government is also bringing them, too, The New York Post reported.

Critics happily pointed out that Adams, as a mayoral candidate, bragged in 2021 that New York City “has been and always will be a city of immigrants that welcomes newcomers with open arms.”

“If these Democrat mayors are now that concerned about having migrants in their cities,” a spokesman for Gov. Abbott said, “they should call on President Biden to do his job and secure the border, instead of attacking Texas with baseless political accusations.”

Mehlman tells AFN it is amusing to watch the illegal aliens flood into Democrat-run cities that literally prided themselves as being “sanctuaries” for illegals.

“And they're actually getting what they seem to have asked for,” he says, “and it turns out they don't like it.”

Yet the reality check, Mehlman adds, is angering the liberal mayors but has not changed their minds.

“What they're asking for is more federal money to pay for it,” Mehlman says.  “So even though they recognize it's a problem now, they don't want it stopped. They just want somebody else to pay for it."

A religious liberty law firm defending an Air Force officer from being forced to get the COVID-19 shot was pleased to watch a federal judge rule in favor of all Air Force personnel in a case winding its way through the federal courts in Ohio.