NATO forces that are piling up in Eastern Europe would decimate the already-battered Russian army if war breaks out, a retired U.S. Army general predicts, but the American public is watching the ongoing war nervously.

“They are not ready for a fight with NATO,” says Jerry Boykin, the retired U.S. Army general, who is now at the Family Research Council.

Relying on NATO’s assessment after 30 days of war in Ukraine, Boykin tells AFN it appears Russia’s army has failed to competently wage a ground war after invading Ukraine on February 24.

“Look at how their logistics can't keep up. Their intelligence is insufficient,” he observes. “Their leadership is terrible. And their command-and-control systems have failed them." 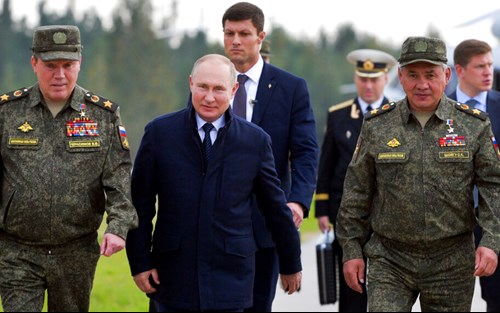 This week, Russia’s deputy defense minister announced troops around Kyiv are pulling back to “increase mutual trust” during ongoing peace talks. That claim of a peace offering was dismissed as a laughable lie and, sure enough, artillery was raining down around Kyiz just hours after the defense minister’s announcement, The Associated Press reported.

More likely, the AP story said, citing British military intelligence, the beat-up Russian army was pulling back to Belarus and Russia to reorganize. That means Kyiv still remains a target, Britain’s military said, so Russia is pounding the city and its suburbs with artillery and missiles while ground forces get ready for another attack.

Across the border in Poland, meanwhile, NATO troops were massing in early February, before Russia’s invasion, and those troop numbers reportedly have climbed to tens of thousands.

U.S. troops now number more than 10,000 in Poland and 100,000 across Europe, where they are training for war from Germany to Poland’s neighbors Estonia, Latvia, and Lithuania.

According to Boykin, by now Vladimir Putin has to know his army is unprepared to fight and win against NATO.

“I can assure you that just the mere fact that NATO has had some warning now, and time to prepare,” Boykin says, “I think puts NATO on a much better footing."

That massive troop build-up is not being ignored by the American public: In an NBC News poll, 41% of respondents said they believe the U.S. will be at war with Russia within a year, and 16% said the U.S. is already in a proxy war against the Cold War enemy.

Among other poll numbers, a whopping 82% of respondents said they’re concerned war will involve nuclear weapons, an apocalyptic fear that had largely died away after the Soviet Union broke apart in the 1990s.

AFN reported in a March 25 story Russia’s military doctrine allows for use of a battlefield nuclear weapon if the enemy is winning and also to send a political message to its enemy to stand down.

NBC News surveyed 1,000 adults, 790 of them registered voters, for its poll that found the public has little confidence in President Joe Biden. A whopping 73% said the U.S. is on the wrong track and 55% disapprove of his job as president.

Responding to the poll, Gary Bauer of the Campaign for Working Families says the poll numbers are “terrible” not just for the Democratic Party but also for the country. The public, he says, is paying attention to Ukraine and knows the potential for a bigger conflict.

“That’s disastrous,” he tells AFN, “and it means we are in one of the most dangerous times in the history of the United States.”

Can Putin withstand the pressure?

A national defense expert and retired Army general is not ruling out the possibility of Vladimir Putin getting removed from power.