Not only is Russia's advance on Ukraine pushback against the smaller nation's desire to be part of NATO, but global strategist Col. Dan Steiner argues it's also a means to weaponize people in an effort to destabilize countries in the region.

News reports are pouring in about Russia's wide-ranging attack on Ukraine, which Russian President Vladimir Putin launched local time Thursday. Russian tanks and troops rolled across the border in what the Ukraine government called a "full-scale war." Putin earlier had announced a "major military operation" against Ukraine – and threatened any foreign country attempting to interfere with "consequences you have never seen" … seen by many as a chilling reference to his country's nuclear arsenal.

In a previous American Family News interview in November with Dan Steiner, the retired Air Force officer predicted the winter invasion of Ukraine by Russia. Today, he is also convinced the United States and its allies understood Russia was going to mount a full-scale attack. But poor leadership within the Biden administration failed to take pre-emptive action to thwart Putin's plan, according to Steiner.

Steiner tells AFN he is "more convinced than ever" that Russia's attack on Ukraine is the execution of a plan that has been underway for at least 15 years. The difference today, he argues, is that Russia – unlike in the past – now has the ability to challenge the expansion of the North Atlantic Treaty Organization (NATO).

"Putin very likely sat down with his planners at least 15 years ago and started designing a plan that would push back on the Eastern European members of NATO," Steiner contends. And along the way, he surmises the Russian president has picked up on a possible means to destabilize NATO and the European Union.

"In 2015," Steiner explains, "Putin began to see through the Syrian civil war the advantage of creating human waves – essentially the development of large-scale stampedes." The Russians focused on Aleppo during the conflict in Syria, resulting in "the creation of a human wave that sent massive numbers of people into Turkey [many of whom were passed on to Europe]," he points out.

"The Belarus Polish border flare up earlier in the summer was another example for the Russians to learn from," he adds. Poland's border was threatened by an influx of several tens of thousands of immigrants.

"If people can be weaponized like this, it will prove … a great rift [exists] between Poland and Germany – between Poland and the traditional Western Europe," Steiner argues. "It's all by design, and not the 'fog of war,' as CNN said this morning." 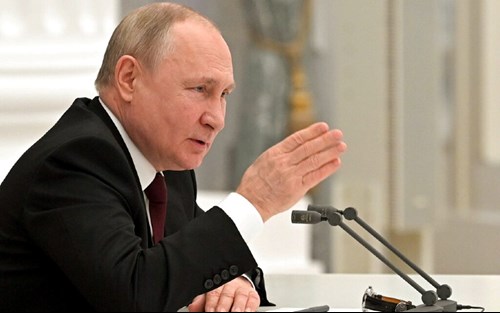 "As part of his war plan," Steiner continues, "Putin fully anticipated that he could create a level of panic in Ukraine that would send not just hundreds of thousands, such as in Syria, but millions of people over the next few months into Poland and further west."

That, says the retired military officer, is something the Poles aren't going to accept.

"They wouldn't even accept the 50,000 that Belarus tried to push on them," Steiner notes. "The Poles are going to do what the Turks did and pass a massive number of people fleeing Ukraine into Europe."

He also contends Poland won't be the only "catch basket" for those fleeing the war, as other countries will also be forced to deal a massive human migration crisis.

"Putin will then have NATO and the European Union countries arguing amongst themselves without ever firing a shot at them," says Steiner – and ultimately, Putin will have Ukraine and will have forced NATO into quite a mess.

A combat veteran is speaking out, questioning the Department of Defense and Marine Corps' decision to choose an unreliable vaccine over the world’s most reliable members of America's armed services.