Subscribe
Is Putin looking at Biden's numbers as he eyes Ukraine?

Is Putin looking at Biden's numbers as he eyes Ukraine?

A national security expert argues that unless Vladimir Putin can be convinced that the Biden administration has the support of the American people, Russia's possible incursion into Ukraine could become a reality.

As tensions escalate between Russia and Ukraine, Russian President Vladimir Putin is showing much resolve as Secretary of State Antony Blinken plans a visit. Russia is making it tough for the U.S. to discern what Russia actually thinks can be achieved through diplomacy.

The fundamental issue behind the hostility is the expansion of North Atlantic Treaty Organization (NATO) that has taken place since the fall of the Soviet Union, Col. Dan Steiner (USAF-Ret.) tells American Family News. According to the national security expert, the fact that Ukraine is expressing its own sovereignty to even consider joining NATO seems to have vexed Russia to the point of tossing out every possible diplomatic path to avoid a conflict in Eastern Europe. 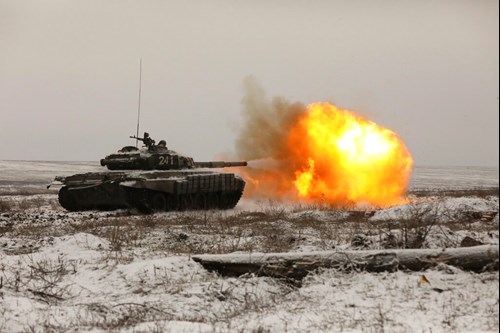 Russia, says Steiner, was not in a position to militarily challenge the West a few decades ago. "[But] today," he argues, "Russia has the ability to say enough is enough and be effective in slowing down what they truly believe is a Western incursion up to their border – [and] they're willing to go to whatever means necessary to make that happen."

Russia's persistent threats to Ukraine leave Steiner feeling "puzzled," as he wonders if the leaders in Washington understand the gravity of what Russia is threatening to do. For Ukraine, he considers the crisis equivalent to what the United States was facing during the Cuban missile crisis.

"[The United States is a] divided and polarized nation today, [so] can a president with a 33% approval rating rally a nation around a conflict in Eastern Europe?" he questions. "The United States is in a deep game right now, and it comes at a time when Americans have zero confidence in the Biden administration."

And Putin is fully aware of that, says Steiner, which explains why the Russian leader is "standing up against Biden – he realizes the president will not be able to get the American people behind him in this crisis."

It's in Blinken's court

On the heels of Biden rallying America's European allies to pledge as one that they will take tough measures against Russia if troops move into Ukraine, Secretary of State Antony Blinken will be meeting with Russia's Foreign Minister Sergey Lavrov in Geneva on Friday.

"This meeting has far more serious repercussions than the public understands right now," Steiner suggests. "The Biden administration has dealt with crisis on top of crisis, and has fumbled every one of them."

Steiner asks what he calls the "golden question": Can the American people have confidence in Biden and his administration as the crisis continues to escalate between Russia and Ukraine? "[And] what level of resolve does Moscow have to push back against Western advancement into Eastern Europe today?" he adds.

If Blinken is unable to convince Russia that the U.S. has that same level of resolve, Steiner contends there's no reason why Russia won't invade Ukraine in the very near future.

Expert: For America's sake, FBI and CIA … get over yourselves!

An expert in counterterrorism is warning that unless America's intelligence and law enforcement agencies decide to break through the wall they've constructed between them, another 9/11 is a definite possibility.