Subscribe
Seminary in Cuba survived Castro; it will survive Ian

Seminary in Cuba survived Castro; it will survive Ian

While U.S. states will have a chore to recover after the destruction brought by Hurricane Ian, they will have the luxury of available resources. Not so in Cuba.

Hurricane Ian slammed western Cuba in the early hours Tuesday, prompting officials to evacuate thousands of residents with flooded streets and dams near capacity. Photos on social media out of the poor, communist country depict the extensive damage one would expect following a devastating storm with heavy rains and winds of up to 125 mph.

Aside from housing and other structures damaged, the storm ripped into the Cedars of Lebanon Seminary near Pinar del Rio, where some 50,000 people were evacuated before Ian came ashore. Gary Curry of Bridge Builders for the Cross has been in touch with the seminary, which is affiliated with the National Association of Free Will Baptists.

"The major damage is in the house of the seminary director (pictured above) and there is some damage in some housing there but not all of it," he tells AFN. "So, I don't think there would be a problem with continuing classes – if [the students] can get there." 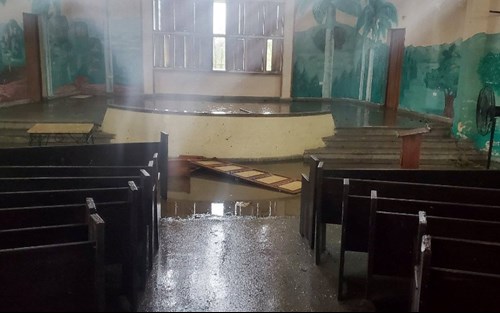 The obstacle, he explains, is infrastructure damage from the storm, including flood-damaged roads. In addition, regular blackouts and power shortages had plagued Cubans for months already. He describes the power grid when he visited Cuba two weeks ago.

"They were cutting off electricity to save fuel in various areas on a kind of a rolling blackout," Curry shares.

Now, there's no power – which he says means rebuilding will be hampered, as will meeting the needs of the people. "It may be difficult because everybody's going to be needing supplies – supplies for anything, whether it be food, building, gasoline, diesel for vehicles. It's all in short supply," he laments.

Bridge Builders has food stored in Cuba ready to distribute and will work on obtaining more because that's the largest shortage. If needed and funds are provided, the organization will help with restoring the seminary – which was established shortly before Fidel Castro took control of the government in January 1959.

A disaster relief ministry is planning a trip to a hard-hit community in Louisiana, where the plan is to repair and restore more than 100 homes so struggling families can be in them during the Christmas season.