Subscribe
McCullough: Did public see side effects of vax on football field?

McCullough: Did public see side effects of vax on football field?

A U.S. Army health center recently weighed in on a purported lack of evidence surrounding COVID-19 vaccines and cardiac injuries in athletes but a cardiologist says peer-reviewed literature, and his own expertise, can easily debunk their statement in light of a sea of evidence. 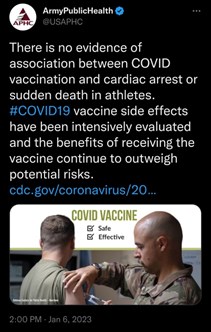 On January 6, the U.S. Army Public Health Center (recently rebranded as Defense Centers for Public Health-Aberdeen) tweeted a statement to suggest the COVID-19 vaccine is safe and effective. According to the health center, “There is no evidence of association between COVID vaccination and cardiac arrest or sudden death in athletes. #COVID19 vaccine side effects have been intensively evaluated and the benefits of receiving the vaccine continue to outweigh potential risks.”

In light of the Jan. 2 collapse of Buffalo Bills player Damar Hamlin (pictured above) during a game, American Family News spoke to Dr. Peter McCullough about their assertion. The renowned, board-certified cardiologist said it's now "simply too late" to attempt to normalize the risk of cardiac arrest after the COVID-19 shot.

There are over 1,200 papers in peer-reviewed literature on fatal and nonfatal vaccine injuries—and many of these injuries lead to cardiac arrest, he notes.

McCullough indicates the FDA agrees that vaccines cause heart damage, expressly associated with myocarditis or inflammation of the heart muscle.

“If we let people with myocarditis play in sports,” he warns, “they can develop cardiac arrest.”

For that reason, he says, medical guidelines prohibit people from participating in sports if they have myocarditis. That is because there is a direct link between the vaccine and the potential for heart damage, and at this point that is not even a “debatable point,” he insists. 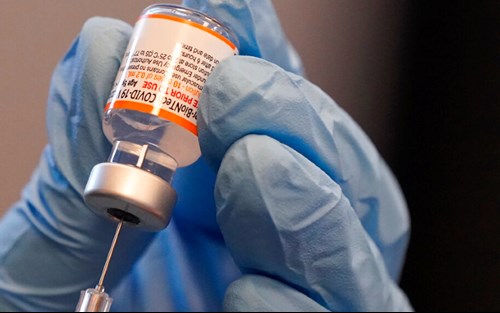 McCullough stands by his assertion because of the amount of peer-reviewed literature that verifies his conclusion. In one example, he points to a “notable paper” published by James R. Gill and colleagues. “Two boys took the Pfizer vaccine and within days of their second shot, they were found dead at home,” he discloses.

In a second example, Martina Patone and colleagues reported “100 fatal cases of vaccine induced myocarditis,” he points out.

The Epoch Times also reported that more than 270 U.S. athletes have died after vaccination, according to a peer-reviewed letter.

As a result of a Freedom of Information Act request, The Epoch Times was also able to gather data from the CDC to report “hundreds of safety signals,” including Bell’s palsy, blood clotting, and death.

Col. Alisa Wilma, director of Defense Centers for Public Health-Aberdeen, did not return a January 10 inquiry from American Family News. She also did not provide evidence of the health center’s experience with an athlete’s development of cardiac arrest or sudden death, nor did she provide evidence to disassociate COVID-19 vaccination from cardiac arrest or sudden death in athletes.

This is also the same health center that court martialed one of its own medical officers when he sounded the alarm about an 1,100% increase in adverse events from viral vaccines and other protected communications related to the mandates. Wilma also did not return comment about retaliation against whistleblowers.

'And that's how people die'

Contrary to the safety and effectiveness of the vaccine that’s being portrayed by the Army’s health center, McCullough explains how people, such as athletes, are dying. When there is heart damage, he says, a “small scar” results from that. So in the “perfect storm” and the right conditions, such as strain and the flow of adrenaline, some people fall victim to a fatal heart rhythm, the cardiologist concludes,

“The fatal heart rhythm that develops circulates around the scar. The electricity literally goes around the scar,” he explains. “The result is reentrant ventricular tachycardia that degenerates into ventricular fibrillation, which becomes a flatline and that’s how people die.”

That is what likely happened to Hamlin, the Buffalo Bills safety who collapsed during a game in front of his teammates and fans, McCullough insists. It was the quick use of CPR and an automated defibrillator that shocked the player back into a normal heart rhythm, he says.

The public deserves to know more about the facts surrounding Hamlin’s collapse, McCullough contends, especially with cardiac arrests happening on a daily basis to athletes, but the doctor predicts there will be few inquiries from the media about the NFL player’s vaccine status. That is because scrutiny of the vaccine is frowned up even after Hamlin’s live incident during the game.

“The press and the family are silent on this issue,” McCullough notes.

As far as vaccine manufacturers Pfizer and Moderna, McCullough tells AFN they should revise their consent form to state the COVID-19 shot can result in fatal myocarditis. There should be a “fair balance” that mirrors TV commercials that disclose the side effects, he says.

Nearly a year ago, Dr. David Gortler, whistleblower and former senior advisor to the FDA commissioner, revealed that vaccine manufacturers, the FDA, and the CDC were “negligent in not investigating” the risks of the vaccine to heart health.

“It’s now a public health priority for America,” McCullough concludes. “We can’t keep pretending it’s not happening, because it’s completely documented and published that fatal myocarditis can be caused by the vaccine.”

Meanwhile, the deadline for Pfizer to submit results of a study regarding heart inflammation post-vaccination has passed.

Waiting and surgery aren't the only options

A pediatrician in North Carolina is offering a second opinion on the American Academy of Pediatrics' (AAP) new guidance that recommends drugs and surgery to combat child obesity.