Subscribe
Operation Rescue: How many hurt women is enough?

Operation Rescue: How many hurt women is enough?

A notorious and ailing abortionist has accumulated a long list of medical emergencies, and even a fatality, and a pro-life group is asking when will authorities finally step in.

For several decades Leroy Carhart (pictured below) has operated abortion clinics in a suburb of Omaha, Nebraska and also at a late-term abortion clinic in Bethesda, Maryland.

In the most recent incident, in Bethesda, a 37-year-old woman was transported by ambulance to Holy Cross Hospital. The woman, pregnant at 21 weeks, suffered complications and the abortion had to be completed under the care of the hospital.

Cheryl Sullenger of Operation Rescue says the 9-1-1 call suggests an abortion clinic employee was downplaying the incident in the recorded call. 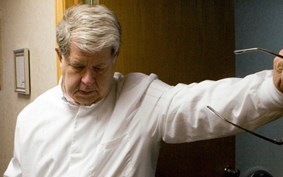 “Making it sound like, Oh, she's fine, everything's good,” Sullenger says, “but Carhart wanted her transported to an emergency room.”

Operation Rescue has documented 23 medical emergencies at Carhart-run clinics, including one fatality, dating back to 2012.

How many other doctors, pro-lifers ask, could still be practicing after accumulating such a record?

“We don't think [Carhart] should be allowed to practice,” Sullenge insists. “He'll be 80 years old this year and we think enough is enough. It’s time for Leroy Carhart to retire.”

A whistleblower continues to reveal startling information about the impact of COVID vaccines on pregnant women.