White House press secretary Karine Jean-Pierre made the claim last week that President Biden has visited the U.S.-Mexico border, which is untrue, but a media watchdog says the national media ignored the fib because they are all on the same team.

“He's been there. He's been to the border,” Pierre, speaking of her boss, told Fox News correspondent Peter Doocy during a two-minute exchange.

That claim, which is an easy lay-up for willing fact checkers, came after Doocy asked if Biden would visit the border after House Minority Kevin McCarthy, the Republican congressman, asked the president to join him there. 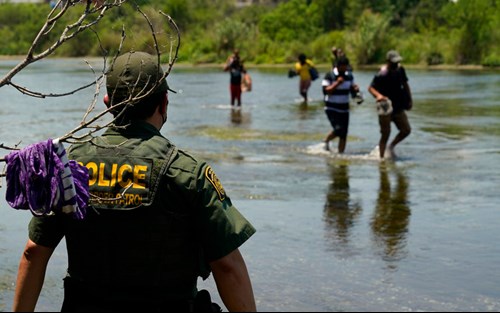 Using the most charitable read, you could say Jean-Pierre meant Biden has visited the border at some point since he joined the U.S. Senate in 1972. Or she was just lying.

“There is a difference between being to the border and actually doing a border visit,” says Tim Graham of Media Research Center. “I mean that's, I think, the kind of game they're playing here.”

After lying about Biden’s border visit, the White House press secretary then audaciously claimed President Biden has been working to secure the U.S-Mexico border, when in reality that's far from true. The number of illegal aliens apprehended by Border Patrol agents broke records during the 2022 fiscal year after Biden removed Trump-era border security measures on his first day in office.

“Since he took office,” she said, “President Biden has been taking action to fix our immigration system and secure our border.”

Regarding the Republicans in Congress, she accused them of being unwilling to “to work with us” on border security, even though GOP leaders have pleaded for the Biden administration to re-enact tough measures that block them from entering and remove illegals from inside the U.S.

As far as the national media, Graham tells AFN it’s telling there were no fact-checking articles after that claim because, he says, that article would point out the guilty party in the White House.

“The irony of this whole situation is, as we have demonstrated,” he says, “the networks have tried very energetically to ignore the border crisis.”

George Soros has gotten into the radio business in an effort to influence Hispanics and Latinos in South Florida but a Hispanic pastor insists the menacing billionaire – famous for using his money to fundamentally change America – has made a foolish investment in The Sunshine State.