Both sides of the political spectrum expected the sale of Twitter to libertarian Elon Musk to spawn some obvious changes to the popular social media platform – they just didn't know what those changes might be, or how quickly they might rise to the surface. Now they might have their answer.

It was obvious that things weren't normal on Twitter in the 24-48 hours following the announcement on Monday that billionaire Elon Musk, of Tesla/Starlink/SpaceX fame, was going to buy the social media network. CNBC reported on Tuesday night that high-profile accounts were losing "thousands" of followers – and that Twitter was attributing "fluctuations in follower accounts" to "organic" account closures.

For example, former President Barack Obama – the most-followed user on Twitter, according to the CNBC report – lost more than 300,000 followers after the announcement. Pro-LGBT singer/songwriter Katy Perry (the third-most followed) saw her follower count drop 200,000. How about "Squad" member Rep. Alexandria Ocasio-Cortez (D-New York)? Down more than 20,000.

At the same time, however, other user accounts – notably, those of "conservative" bent – were seeing their follower counts increase rapidly following the announcement. Donald Trump, Jr. tweeted he'd experienced a jump of 87,000 new followers on Tuesday; conservative commentator Laura Ingraham tweeted late Tuesday she is "sure it's just a coincidence" that after being "stuck" at 3.9 million followers for a year, she's now at 4 million; GOP Governor Ron DeSantis (Florida), was up over 140,000; and by Tuesday night, outspoken GOP Congresswomen Marjorie Taylor Greene of Georgia had gained almost 100,000 new followers. 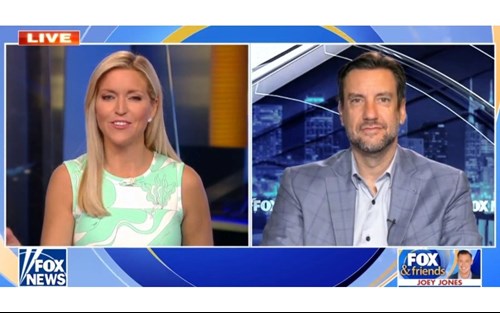 'Away with those algorithms'

Clay Travis is a sports journalist and founder of the sports-focused website OutKick. He is among those testifying to noticeable increases in Twitter followers. He told "Fox & Friends" on Wednesday morning he was up almost 20,000 followers in the 48 hours following the announcement that Musk was going to buy Twitter.

"There are a lot of different theories you could toss out there," he began. "This is abnormal. I have not seen any follower counts surge like this in years, and really haven’t ever seen anything like this."

Travis offered his preferred theory behind the jump in followers among conservative Twitter accounts. "One theory, obviously, is that a lot more conservative people … have been coming onto the site [since the announcement]," he stated. "But the difference is it's not just conservatives gaining – it's left-wingers losing."

He said that makes him wonder if Twitter is starting to pull back on some of the "guardrails" that had been set up to quash conservatives' comments.

"[Specifically, guardrails that] were rigged in favor of left-wingers," he continued. "And [I contend] they're doing that because they're worried that Elon Musk may be coming in and starting to publicize potentially some of the algorithms, some of the behind-the-scenes data manipulation that was going on inside of Twitter."

Donald Trump, Jr. also alluded to that possibility, tweeting: "Wonder if they're burning the evidence before new mgmt comes in?"

Travis sees the phenomenon as validation of an argument conservatives have made for a long time.

"I think that we're just seeing some of these restrictions taken off – and the result is you are seeing … that this was a rigged social media game designed to favor the left-wingers," he shared. "And with Elon Musk coming in, those prescriptions are returning to more of a normalcy."

The news that billionaire Elon Musk is purchasing Twitter has plunged the Left into a swirling sea of depression and dismay, and that collective meltdown is revealing the totalitarian views of those who claim they are defending democracy from Nazis and protecting truth and facts from conspiracy theorists.