Darrell Brooks, accused of driving and killing people at a Christmas parade, is escorted from a courtroom after making an initial appearance. He is charged with intentional homicide.

It appears the national media has moved on from the mass murder of innocent people who were run over at a Christmas parade in Wisconsin, and they are hoping you will move on, too, but Tucker Carlson and a handful of others are not allowing a domestic terror attack to become yesterday’s news so easily.

The Nov. 23 death of an 8-year-old boy at Children’s Hospital of Wisconsin marked the sixth person to die from SUV driver Darrell E. Brooks. He allegedly plowed his Ford Escape down the parade route in Waukesha, where he literally ran down dozens and dozens of parade participants. A total of 62 people were injured, including 18 children, and Brooks has been charged with first-degree intentional homicide.

Responding to Brooks and his vehicle attack, Fox News host Tucker Carlson told his audience it seemed odd that much of the media covered the initial story for a day and then moved on.

Well, he said, it’s not so odd when you dig a little deeper.

“The main thing they want you to know,” Carlson sarcastically told his audience, “is that these killings had absolutely nothing to do with the Kyle Rittenhouse verdict two days before. Nothing whatsoever.” 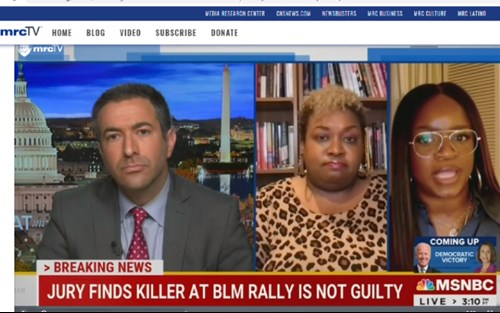 Kenosha, site of the Rittenhouse trial, is only an hour’s drive from Waukesha; a string of social media posts by Brooks --- one Facebook post about white people reads “KNOKK DEM TF OUT!!” --- crudely make it plain he believed white people deserved to be hurt for their racism.

"A racist black nationalist with #BlackLivesMatter all over his social media just murdered six white people with his SUV," Jesse Kelly, a Texas-based radio host, concluded in another Twitter post.

Rittenhouse, meanwhile, was smeared by left-wing media outlets as a “white supremacist” vigilante who hunted down innocent people at a rally for racial equality. After the 18-year-old was acquitted, those same journalists and cable news pundits declared to their left-wing viewers that the criminal justice system favors racist whites and therefore blacks should now live in fear for their safety. America, they said, had failed again.

According to Carlson, it is true the public does not know for certain if Brooks ran down white people as revenge for the Rittenhouse acquittal. But one thing, he said, is certainly true.

“We can be absolutely certain,” the Fox News host concluded, “that the national media will spend zero time trying to find out.”

The Washington Post keeps going back in time and amending five years of Russia-related accusations against Donald Trump after the truth has come out, and a media watchdog says the famous newspaper deserves credit for doing so but scrutiny for being fooled.