Subscribe
If governor stays in office, he should pin medal on media

If governor stays in office, he should pin medal on media

The current poll numbers suggest California’s angry and arrogant Democratic governor will remain in office Wednesday morning, concluding the state’s recall election, but among the many victims in the once-great Golden State is the death of truth and fairness in journalism.

Some polls also showed a narrow split of 48%-47% in past weeks, leading the angry, desk-pounding governor to lash out (pictured above) during a recorded interview with The Sacramento Bee newspaper.

Meanwhile, frustrated Californians have witnessed their governor ignore his own business-destroying lockdown rules to eat at a fancy restaurant. He also sent his own child to attend a private school while public schools were closed down across the state.

Now, more recently, California are witnessing The Los Angeles Times attempt to protect Newsom by attacking his main opponent, radio show host Larry Elder, on both the front page and the opinion page.

American Family News reported in a Sept. 1 story that a Times columnist called Elder the “black face of white supremacy,” and that op-ed was followed by a newspaper editorial that bizarrely fantasized about California’s future if Elder is elected governor. Not to be outdone by its far-left opinion page, the Times is being called out for not only downplaying a physical attack on Elder last week but for brazenly making it appear as if the Republican candidate had attacked someone himself. 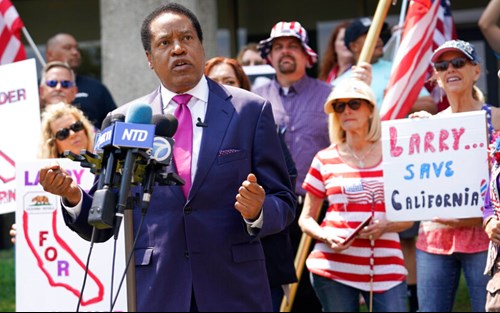 Elder was touring a homeless camp near Venice, when a woman wearing a gorilla mask threw an egg at him.

Responding to the incident, the Times published two stories, and posted both of them on social media, but the newspaper’s attempt to smear Elder was obvious for all to see, Fox News reported.

The first story was headlined, "Larry Elder cuts Venice tour short after scuffle breaks out," which described the incident.

The second headline reads "LAPD investigating Larry Elder homeless attack in Venice," but that story is accompanied by a photo of Elder with his hand on the cheek of a woman. It appears from the photo the candidate is literally slapping her.

In her own Twitter post, the woman in the photo, Soledad Ursua, called the photo a “deceiving pic” because she was about to hug Elder. Ursua, who serves on the Venice Neighborhood Council, stated that people were yelling racial slurs at Elder, too, and the popular radio host told Fox News he heard racist words, too.

A white woman wearing a gorilla mask assaulting a black politician? You would think the mainstream media would be all over that story but, of course, he is a member of the wrong political party.

“If I were a Democrat,” Elder told Fox News, “obviously this would be called systemic racism. They'd be calling it a hate crime.”

In the same interview, Elder reminded Californianstheir governor "shut down" businesses across the state but gathered with friends for a birthday part at the exclusive French Laundry restaurant.

"The very people," Elder pointed out, "who drafted the mandates were sitting there with him."

Republicans and conservatives are not surprised, sadly, to witness the race-sensitive national media shrug its collective shoulders at Elder but, even worse, the Media Research Center says the the far-left media is downplaying the incident as funny because, in their view, Elder deserved what he got.

“But they covered it almost as if it was a gaffe,” Drennen complains, “just to show you how unpopular Larry Elder is: Look, he got eggs thrown at him.”

The satirical Babylon Bee makes enemies every day by using humor to make a salient point, but the Bee’s CEO says a formidable foe has emerged: powerful Big Tech companies that are running interference for unhappy politicians.