Hope that 'tide is turning' after NY judge defends unvaxxed

Critics of the jab-or-job COVID-19 mandate are praising a ruling in New York that ordered the government to bring back public employees who were fired for refusing the controversial shot.

In the ruling from Judge Ralph Porzio, whose State Supreme Court office is based in Staten Island, he accused New York City’s health commissioner of violating the constitutional rights of the city's sanitation workers by barring them from their jobs. 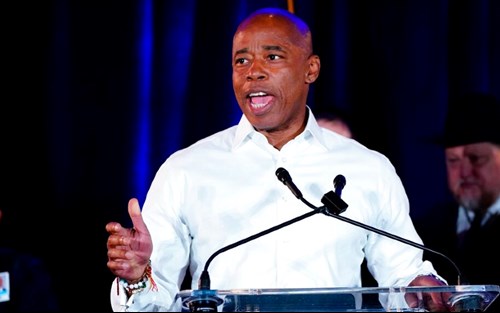 The ruling also accused Mayor Eric Adams (pictured at right) of “arbitrary and capricious action” because the mayor exempted certain professions from the shot, such as athletes and theatre performers, but fired city workers even when the worst of the pandemic had come and gone.

After reading over the ruling, attorney Mat Staver of Liberty Counsel tells AFN he was grateful New York City’s jab-demanding leaders were hit by Judge Porzio’s “arbitrary and capricious” charge, a familiar phrase in the legal profession.

“But beyond that,” Staver says, “he said that this was not about health. It was about compliance.”

Staver, whose law firm is fighting the COVID-19 mandate in courtrooms across the country, also noticed Judge Porzio slammed the shot itself, since it is now admitted the shot does not stop transmission.

In medicine, politics, and the media, defenders of the COVID-19 shot assured the public just one dose would give immunity from the highly contagious virus and would therefore protect others, too. So the promise of protecting both yourself and others, including your co-workers, was used to demand a mandatory shot.

“We have learned through the course of the pandemic,” Judge Porzio wrote in his conclusion, “that the vaccine against COVID-19 is not absolute. Breakthrough cases occur, even for those who have been vaccinated and boosted.”

“I think what it shows is the tide is turning,” says Twila Brase, whose Citizens' Council for Health Freedom has slammed the COVID-19 mandate during the pandemic.

“We know beyond a shadow of a doubt,” she adds, “that the vaccine doesn't stop anyone from contracting COVID-19."

Regarding the ongoing litigation over shot mandates, Staver tells AFN Liberty Counsel is currently representing "hundreds and hundreds" of non-compliant clients across the country.

In July, Liberty Counsel settled the nation's first class-action lawsuit on behalf of unvaxxed health care workers. The settlement was for $10.3 million.

After being fired for refusing the COVID-19 shot, more than 1,000 City of New York employees were informed by a judge Tuesday they deserve their jobs back.