An atheist attorney who makes headline-grabbing accusations about religious expression in the U.S. military has picked a new target: graveside wreaths.

Mikey Weinstein, a U.S. Air Force veteran who leads the Military Religious Freedom Foundation, has picked a battle with Wreaths Across America, a non-profit national organization that places Christmas wreaths on military graves with help from volunteers.

According to the group’s website, that annual observance falls on Saturday, December 18, and it appears Weinstein and his group have gotten ahead of the event and are accusing the group of laying wreaths on Jewish graves. The group, however, says its policy forbids that.

Weinstein, who says he is Jewish, took his complaints to a Colorado newspaper, The Colorado Springs Gazette, where he compared the wreaths and bows (pictured above) to a “fundamentalist Christian gang sign” if placed on the grave of a deceased Jewish veteran.

Military grave headstones are traditionally marked with a cross, or with a Star of David, and the atheist attorney and his group have demanded in past years that the wreath-laying group skip Jewish gravestones, the Gazette said. 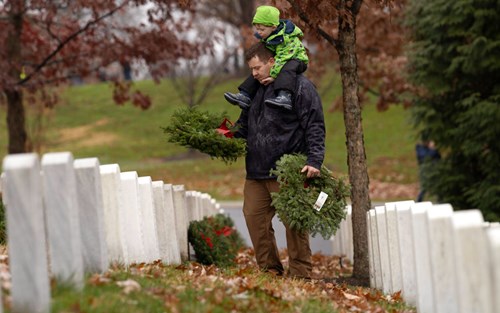 Weinstein, who has a history of making bombastic and even violent comments about Christianity, called a wreath placed on a Jewish-marked headstone “unconstitutional, an atrocity, and a disgrace.”

He also told the Gazette his group has received “thousands of grievances” over the years about the wreaths and an “overwhelming number of complaints” this year, too.

The newspaper story balanced Weinstein’s claims with inquiries to nearby veterans’ cemeteries. A spokesman for Fort Logan said there has never been any complaints about the 12,000 wreaths that are placed on headstones there. A spokesman for the Colorado Springs-based U.S. Air Force Academy said there are 1,350 gravesites there and any request to opt out is honored. There has never been a request to do so, however, a mortuary affairs officer told the Gazette.

The newspaper story also points out the written policy of Wreaths Across America is to “pause and pay our respects” at a Star of David headstone and to not place a wreath there out of respect for Jewish beliefs.

Weinstein and his group produced a photo they said was taken in 2017 that shows a wreath was laid at a Jewish headstone.

Responding to Weinstein’s latest accusations, First Liberty Institute attorney Mike Berry calls it “outrageous and ridiculous” for the atheist attorney to target a non-profit group whose purpose is honoring and respecting military veterans.

Berry, who is himself a military veteran, has fought Weinstein’s heated accusations lawsuit threats in court for several years. He says First Liberty will represent Wreaths Across America if necessary.

"We've stood up to [Weinstein] numerous times,” Berry says. “We've beat him in the past and we're happy to beat him again.”

A commission created by President Joe Biden to “reform” the highest court in the nation has concluded its study without bowing to the crazed demand to add seats to the nine-member court and create term limits for the justices.