The public has been awakened to cultural Marxists in the schools who are determined to indoctrinate children but a behind-the-scenes look is revealing how those activists view their enemies, including suspicious parents, clueless media outlets, and disapproving lawmakers.

In an eye-opening story, two investigators from Accuracy in Media, or AIM, posed as liberal parents who visited two Ohio school districts where they tricked administrators into defending and boasting about race-based lessons that are taught to their students.

In one incident on video, the two “parents” record a DEI administrator named Matthew Boaz (pictured above) boasting how he tricked a TV news station when it asked if Critical Race Theory is taught in Upper Arlington Schools. He denied it was being taught, which was technically true, he recalled, but he happily assured the "parents" when they pretended to be concerned the “tenets” of CRT, such as social justice, are not being taught to kids.

“Those conversations are happening. Absolutely,” Boaz proudly assured him.

Boaz also told the “parents” how the school intends to circumvent state law if Critical Race Theory is banned in the classroom by Ohio legislators. A state bill to ban “racist concepts” died in the Ohio House last year.

Boaz told the AIM investigators that lawmakers can pass a bill to ban Critical Race Theory, “but if you didn’t cover programming or you didn’t cover extracurricular activities, or anything like that, that message might still get out.”

Boaz jokingly adds, “Oops. Oops, there will be a way.”

In a second incident recorded by AIM, a Groveport Madison Schools official named Hilary Staten laughingly explains how the school deals with parents who don’t “fully understand” the purpose of the DEI curriculum. The school, she says, can “trick them” by avoiding or changing certain words in the curriculum that raise alarm. 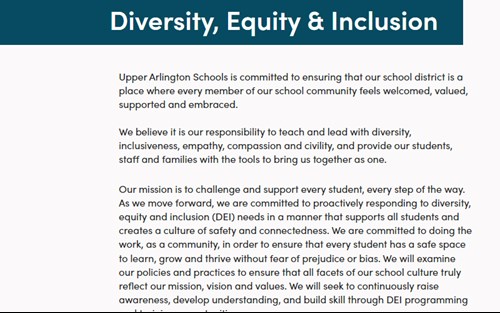 AFN has reported that DEI programs commonly use tell-tale phrases such as “white privilege” and “oppressor” in the lessons. Those phrases come straight from the Marxist-based Critical Race Theory, which simply swaps out minorities mistreated by whites for the poor who are mistreated by the rich.

The two school districts later complained to a local NBC News affiliate that school officials had been unfairly tricked by people posing as parents, even though Boaz is on camera bragging how he tricked an unnamed TV news station over CRT.

“The couple guided the conversation to focus on the topic of critical race theory, which again, is not taught or used in the district,” Kathy Jenney, the superintendent for Upper Arlington Schools, claimed in a statement.

Reacting to the recording of Staten, a statement from Groveport said AIM “grossly and irresponsibly mischaracterized” a conversation that was recorded during the summer. The school district also claimed it is consulting with legal counsel over the incident.

In an interview with AFN, AIM president Adam Guillette says the school officials were caught admitting how they work around any restrictions on teaching CRT and its tenets.

“Even if you pass a law, prohibiting them from teaching the principles of Critical Race Theory,” he warns, “they made it very clear to us that they don't care about any laws.”

Parents want to believe their local school teachers and administrators are good people, he says, but the AIM investigation reveals how those people view their roles and view parents.

“It's an endless game of whack-a-mole,” he concludes. “I don't think the parents are really equipped for this fight, because they're going against professionals.”

New Jersey’s public schools will teach “information literacy” to students in an effort to help them recognize “disinformation” in the media but the effort is being mocked since woke Democrats and teachers’ unions will decide what is true and what is not.