Subscribe
No joke: Here's some cash for profs who go woke

No joke: Here's some cash for profs who go woke

A trio of students at the University of Memphis have gone public to voice their opposition to a plan offering financial incentives to professors who will incorporate "woke" curriculum in the classroom.

"In an email they were offering a $1,500 stipend for professors to redesign their curricula and then another $1,500 stipend after teaching the redesigned course," student Audra Luttrell tells AFN. "So, in total, they'd be getting $3,000 for infusing their courses with 'diversity, equity, inclusion, and social justice.'"

Peyton Thornburg, another student at Memphis, feels like this is a gross misuse of taxpayer dollars.

"Especially in a state where most voters would not agree with that ideology being infused into the curriculum," says Thornburg. "I feel that if a professor chooses to teach it, then that's fine – but for it to be incentivized from the university or even being used as a bribe to the teachers is just unacceptable." 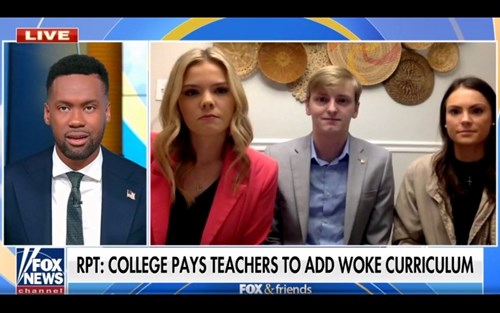 Earlier this week, Luttrell and Thornburg appeared on "Fox & Friends" alongside fellow student Anne-Elizabeth Matheny. Matheny tells AFN that some people are upset about how they were on national television.

"This isn't a political issue; this is an educational issue," says Matheny. "We're worried about how they're taking taxpayer dollars to put in an ideology that is not going to bring our generation, our student body together. Instead, it's going to separate us more."

All three students are members of Turning Point USA, a center-right student moment.

According to information obtained by the Washington Free Beacon, 15 to 20 faculty members would be selected for the program, which begins Spring 2022.

AFN emailed University of Memphis for comment but did not hear back by press time.

Despite a brief derailment just before Christmas, a series of new books is back online aiming to teach children about conservative thinkers and other pro-family advocates.