The anger of pro-abortion activists, antifa-types, and anti-police protesters proves one thing, according to a Christian apologist: Be careful getting between a sinner and their sin. 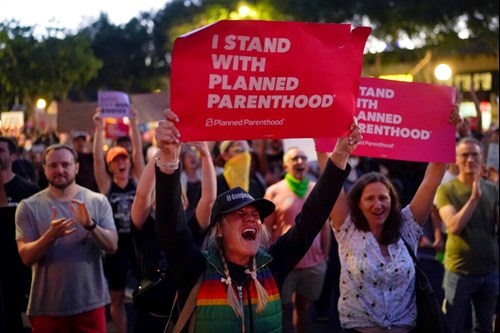 The fury of the Left in the wake of the Supreme Court decision overturning Roe v. Wade has been on full display since the ruling was announced on June 24. Many conservatives seem genuinely puzzled at the level of anger because it's coming not just from feminists.

For example, many in the LGBTQ+ community seem furious, arguing the decision will eventually invalidate same-sex "marriage." John Casey, editor at large for The Advocate, penned the day after the ruling:

"In the days, weeks, months, and years ahead, this decision will cause massive pain, destruction, and death. The legal and moral implications are a category 5 hurricane that will wash over the United States for some time. A stalled, damaging storm over our nation.

"The reversal of Roe also spells doom for our community in myriad ways. It will prevent lesbians, bisexual women, some nonbinary people, and some trans men from having a choice protected by the government."

In addition, liberal men are incensed – and there were vicious and random attacks on police over the July 4th weekend.

For those who may be confused by those responses, biblical apologist Dr. Alex McFarland says the biblical story of Cain and Abel provides some insight. As he explains, the Lord was pleased with Abel's animal sacrifice, but not with Cain's offering of grain.

"And it says in Genesis 4 that Cain was enraged. [In verse 6 of the KJV] the word is 'wroth' – W-R-O-T-H. In other words, the strongest possible word for just crazed anger," McFarland tells AFN.

Continuing to use Cain's anger for comparison, McFarland says people to this day go to great lengths to justify their sinful behavior.

"People very often panic when their carefully crafted identity is exposed and taken away," he states. "When you peel away the layers that people are hiding behind, very often what you find is that it's pretty ugly."

McFarland contends that that level of rage has to have some demonic inspiration. He refers to Genesis 4:7, where God warns Cain: "… Sin is crouching at your door; it desires to have you, but you must rule over it."

The U.S. State Department is looking for organizations that will help spread atheism and humanism throughout the globe.