Subscribe
Female athletes fighting 'Lia' and the Left get an assist in U.S. senate

Female athletes fighting 'Lia' and the Left get an assist in U.S. senate

Male athletes who say they are “transgender” are still dominating and defeating female competitors, and now they are doing so with the tepid blessing of the cowering NCAA, but female athletes and now a U.S. senator are fighting to demand science-based rules and common-sense regulations.

American Family News has reported the NCAA was forced to act weeks ago after collegiate swimmer “Lia” Thomas (pictured above) was setting never-to-be-broken Ivy League records at women’s swim meets. But the national athletic board addressed the issue by authorizing a sport-by-sport policy for testosterone levels, which really meant tossing the hot-button issue to lower-level athletic boards to decide.

Reacting to the NCAA’s decision, female track star Selina Soule (pictured below) says the organization refused to protect female-only athletics, which was “heartbreaking” to watch, she said.

“It shows,” Soule told Newsmax in an interview, “that they do not care to protect women and ensure that no other girls have to experience what I went through.” 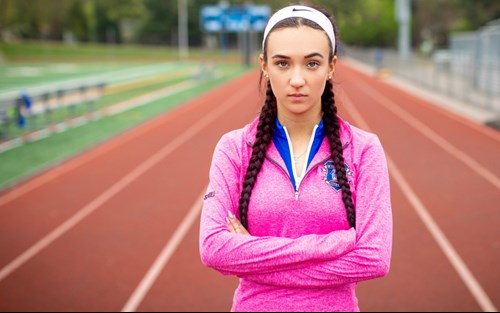 Soule, who is now in college, was competing in high school track in Connecticut when male athletes joined the track team because they identified as girls. Like the swim records being trounced by Thomas, the stronger and faster male athletes set state track records that left female runners far behind.

“I raced against these [male] athletes over a dozen times,” Soule said, “and every single time I lost by a landslide.”

U.S. Senator Mike Lee (R-Utah) attempted to address the issue last year when he introduced the plainly-stated Protection of Women and Girls in Sports Act.

The senator spoke up for female-only athletes recently on National Girls and Women in Sports Day, when he met with the Independent Women's Law Center to push for a federal law that protects female track athletes such as Soule and female collegiate swimmers unable to keep up with Thomas.

"My bill is something that would strengthen and protect the integrity of female sports," said Lee. "It would provide that any recipient of federal funding that operates, sponsors, or facilitates athletic programs or activities and permits a biological male to participate in women's sporting events would be in violation of Title IX."

"The activists who are pushing to open positions on women's teams to biological men," she said, "are doing nothing but undermining girls' competitiveness and the fundamental fairness of all women's sports competition."

American men have a problem

A human trafficking “abolitionist” says the trade would dramatically diminish if one source that fuels it got the help that is available to them.