Chicago is a crime-ridden, poverty-stricken city in desperate need of help, which is why a church pastor is raising awareness, but he says tackling crime is only one way to bring justice to The Windy City.

Ninety people charged with murder, and another 40 charged with attempted murder, have been enrolled in Chicago's electronic monitoring system, meaning they are confined to their homes with an ankle monitor rather than cooling their heels in jail.

Pastor Corey Brooks (pictured at right) of Project HOOD, meanwhile, is spending several months on a roof, in the most dangerous South Side neighborhood, to draw awareness to violence and its innocent victims who deserve justice. 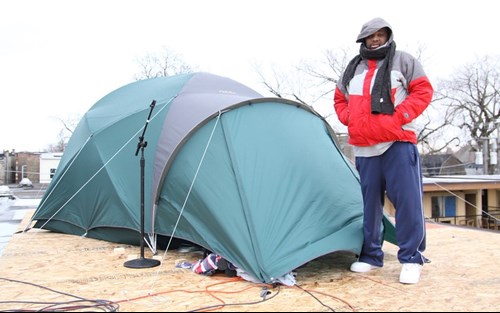 “Although I do believe in innocent until proven guilty, we still have to make sure that we have safety for the public,” Brooks tells American Family News. "Especially when we're experiencing such a high murder rate, and a gun violence rate, here in Chicago.”

Brooks, who leads New Beginnings Church, was featured in a January 7 AFN story that reported he is camping in a tent through February to raise money for a South Side community center.

According to Cook County Sheriff Tom Dart, more than 850 people are charged with aggravated gun possession in the same home-monitoring system.

Chicago also has a very liberal, soft-on-crime district attorney, Kim Foxx, who is allowing violent criminals to remain on the streets in a city reeling from violent crime and begging for justice.

“Government can legislate laws but it's God that changes the heart,” Brooks says. “And that's what we're all about. We want to see people's hearts changed toward God, toward their family, toward community.”

A public library has postponed its controversial “drag queen” reading event, and is reportedly blaming COVID for the decision, but a grassroots group says the event got cancelled over a lack of background checks on the lewd homosexual performers who were coming to read to children.