Subscribe
Evangelicals onboard with move from 'form' to 'substance'

Evangelicals onboard with move from 'form' to 'substance'

A new survey indicates that while the vast majority of American evangelicals are satisfied with things like the style of music and the level of political involvement in their church, an increasing number would like to see more in-depth teaching from the pulpit.

Although more than 90% of evangelicals are happy with the length of the sermons they hear on Sunday mornings, 30% want those messages to be more in-depth. That's according to a recent survey from Grey Matter Research and Infinity Concepts.

Christian apologist Dr. Alex McFarland tells AFN that he sees the same thing when he talks to the Christians, especially younger evangelicals.

McFarland says the move is away from "form" (the type of worship, the lighting, the aesthetics, for example) and toward "substance" – such as, what does the Bible teach and how do believers apply it. McFarland's advice to pastors?

"The Book of Romans," he states emphatically. "It is imperative that at some point in their life, every Christian goes through the Book of Romans – because [it] tells us how to be right with God, all that we have in Jesus Christ."

He says as a church begins to feed on the Word of God, people are encouraged and unafraid.

"We begin to have a renewed mind. We begin to have a mind reordered with truth, not error," McFarland explains. "And then invariably, the Spirit of God working in us through the Word of God gives us new priorities and we begin to value what really matters." 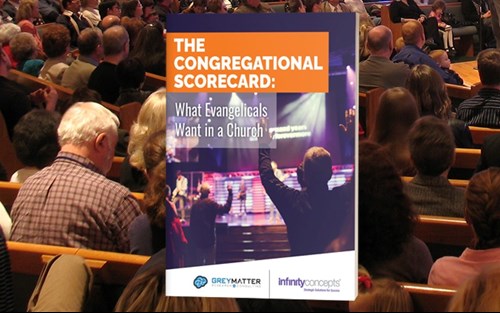 Politics in the pulpit? Bring it on

The Grey Matter report – entitled "The Congregational Scorecard: What Evangelicals Want in a Church" – touches on 14 different areas of potential "change" in churches, sermon depth being just one. It also delves into what types of evangelicals want what types of changes, and whether what people want is always what they need from church.

But the top takeaway from the survey is: Evangelicals are generally very happy with their churches – even when it comes to something as supposedly controversial as politics from the pulpit. In fact, two-thirds say they're happy with what their church does – or doesn't – do in that regard.

Dr. Robert Jeffress of First Baptist-Dallas says his church is deeply involved with whatever political issues the Bible speaks to.

"Politics is defined in different ways by different people. They do want their pastors to address important issues," says Jeffress. "Some people call that political – I've called that spiritual and relevant."

The 199's and 2000s also saw a lot of contention in evangelical churches over what style of worship to use. Not anymore – 68% of evangelicals, according to the Grey Matter survey, are perfectly happy with the style of music at their churches.

"We've navigated the so-called 'worship wars' pretty successfully," the Southern Baptist pastor shares. "Again, people recognize that it's not so much the style of the music, but it's the focus of the music."

But it's not all rosy. Jeffress says he's actually concerned about some things the survey did not look into. "We've seen that Christians are praying less, they're reading their Bible less, they're even identifying as Christians less than ever before. To me, that's what is concerning," he states.

American pastors by the thousands preached on Sunday against a law in Canada that makes it illegal to help someone escape homosexuality or transgenderism.