Subscribe
Female beats out Thomas for 'Woman of Year' nominee

Female beats out Thomas for 'Woman of Year' nominee

The upside-down issue of transgender athletes witnessed a small victory this week after collegiate swimmer Will Thomas, who identifies as a woman, was passed over by prestigious Ivy League schools for a "Woman of the Year" nomination.

The six foot-plus male swimmer (pictured above) joined the women's team his senior year at the University of Pennsylvania, where his record-breaking pool records angered female competitors and female teammates who watched academic leaders and sports officials cower and flee from the issue.

After setting numerous records, he went on to win the NCAA national championship in the 500-yard freestyle.

"It means the world to be here,” he told ESPN right after defeating female competitors, “to be with my best friends and teammates, and be able to compete.” 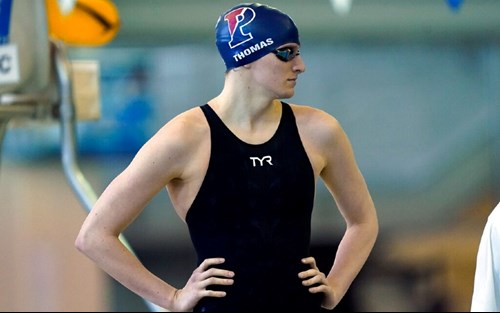 On the campus of UPenn, where female athletes fearing reprisal were afraid to speak out, school officials ignored the complaints from vocal parents and alumni and nominated Thomas for the "Woman of Year" NCAA title.

In the end, however, fencer Sylvie Binder (also pictured above) at Columbia University won the nomination after finishing her senior year with a 131-22 record. She helped her team win a title in 2019 and is a three-time All-American, according to an IvyLeague.com article about her NCAA win.

The eventual "Woman of the Year" title will be named by the NCAA in January.

Steve McConkey, a track-and-field veteran who leads the 4 Winds Christian Athletics ministry, has been protesting the transgender craze in sports for years.

"If they had a silent survey where people couldn't get thrown out of a job,” he says of  frightened critics, “you would find that this is not what people want."

In one rare example, University of Kentucky swimmer Riley Gaines came forward in recent weeks to protest Thomas and shame the NCAA. In a Fox News interview, she recalled her surprise and disappointment when the NCAA allowed a male swimmer, with larger muscles and bigger lungs, to compete against females. She also recalled the “extreme discomfort” with a male undressing in the same locker room as young women.

“I have received so much support, like it's insane," she said, referring to her speaking out against Thomas. “Which tells me who the majority is, what the general population thinks, even if you're not an athlete, if you're not a female.”

Editor's Note: Sylvie Binder was nominated for the NCAA "Woman of the Year" title. When first posted, this story incorrectly stated she had won the title.

Wolverines' coach fired up about life – particularly those in the womb

Jim Harbaugh has never been one to sit on the sidelines and remain quiet – and the University of Michigan football coach stayed true to form recently when expressing his heart for the unborn.