This is a screen image from VR Church where the pastor sings, preaches and performs digital baptisms in the metaverse to a growing congregation of avatars. (Image taken from an AP video)

The metaverse is coming; it can't be stopped. It promises to be a virtual world where individuals can work and play and transact business. But can people go to church in the metaverse?

There are already several "virtual churches" in the U.S. and more are on the way, according to a recent report from The Associated Press. The piece begins by introducing a Virginia man whose family, under quarantine for COVID exposure, recently missed a Sunday church service. So, the man – a member of the Mormon church – strapped on a virtual reality headset and explored what it would be like to worship in the metaverse.

"I couldn't have had such an immersive church experience sitting in my pew. I was able to see the scriptures in a new way," he is quoted as saying. AP continued:

"He's among many Americans – some traditionally religious, some religiously unaffiliated – who are increasingly communing spiritually through virtual reality, one of the many evolving spaces in the metaverse that have grown in popularity during the coronavirus pandemic.

"Ranging from spiritual meditations in fantasy worlds to traditional Christian worship services with virtual sacraments in hyperrealistic, churchlike environments, their devotees say the experience offers a version of fellowship that's just as genuine as what can be found at a brick-and-mortar temple."

But is church in a virtual world still "church"? AFN asked that of Pastor Jim Garlow of Well Versed, a ministry to governmental leaders. He answers: kinda.

"I've got mixed reviews," the longtime pastor responds. "Positive in the sense that we've got to reach out with every vehicle we can reach out. [But] on the other side, the Church is fundamentally incarnational. The whole 'God comes in human flesh' – that's a pretty big deal. And that's what the 'Church gathered' actually experiences: church in human flesh."

Yes, there's a real person controlling the avatar in the metaverse – and he or she can come to Christ through a virtual connection. And it's not that Garlow is averse to technology or change; in fact, he expects the church to change.

"I recognize the importance of finding every creative tool we can," he shares. "There was a time where they thought it was not appropriate for a guy to be on TV proclaiming the gospel when it first came out." 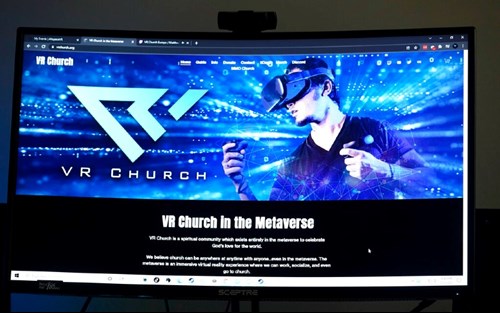 But Garlow argues the Church is heading into a rough season as governments and cultures become increasingly hostile to the gospel.

"I don't know that 'regular church' is going to survive [that hostility]. Probably it's going to be more ekklesia – [gathering in] small groups is what I suspect is coming at us," he continues, "especially when there's hardly a country in the world where persecution of Christians is not ramping up at a very rapid pace."

But perhaps it comes down to this, according to Garlow: making disciples is always going to need face-to-face connection. "I don't know how you do significant, deep, profound ministry without the incarnational component of it," he concludes.

According to the AP story, the VR church attended by the Virginia man conducts virtual baptisms as well as virtual worship services.

One year ago today, President Joe Biden took the oath of office … and one of the first things he did after moving into the Oval Office was to cancel the Keystone XL pipeline. Not surprisingly, Biden's decision – along with his "climate change" mentality – is being blamed for the high energy prices Americans are seeing today.