Pro-life activist Chester "Chet" Gallagher is seen preaching to fellow abortion protesters outside a Tennessee abortion clinic March 5, 2021. This week, he and 10 others learned they have been indicted for violating the FACE Act.

The pro-life movement has awakened to the fact the federal government is coming after peaceful protesters like they are dangerous criminals but activists insist they will defend the unborn even if they face a federal prison cell.

Citing an Oct. 5 press release from a U.S. Attorney’s Office, The Daily Signal reported this week the U.S. Justice Department is charging 11 people with violating the FACE Act stemming from a March 2021 protest in Mount Juliet, Tennessee.

Monica Miller, who leads Citizens for a Pro-Life Society, tells AFN it is “chilling” to learn heavily-armed FBI agents are treating pro-life activists like dangerous villains.

“Dare I say it's sort of a Gestapo tactic,” Miller warns, “and it's very chilling. This is something we really need to watch and to take seriously.”

The FBI’s late-September arrest of Catholic leader Mark Houck at his Pennsylvania home angered pro-life activists, churches, and congressional lawmakers, especially when it was learned the U.S. Attorney’s Office arrested Houck despite the fact his confrontation with a clinic volunteer – he pushed the man – didn’t violate the federal law.

In the case of the pro-life activists in Mount Juliet, federal prosecutors stand a better chance of pressing a FACE Act charge in that situation. That’s because the activists lined the hallways of a medical office building that included the entrance to the Carafem abortion clinic. During that protest, a “rescue” that was filmed and livestreamed by the group, the protesters prayed and sang hymns, and listened to Bible teaching.

The pro-life activists refused to leave when Mount Juliet police arrived (pictured below) and an officer told the protesters they could continue their protest outside. After refusing to leave, the pro-lifers were eventually led them away in handcuffs and charged with trespassing, a misdemeanor. 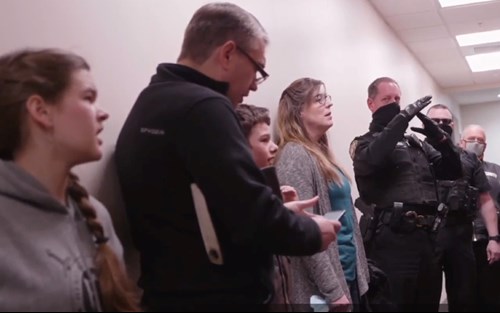 In video footage of the protest, which the DOJ used as evidence against the group, a middle-aged man is seated and blocking a door when an abortion worker attempts to open it.

“You’re trespassing,” she complains to him.

“You need to move,” she unhappily tells the man.

“No ma’am,” the man quietly replies. “No disrespect, ma’am, but I want you to know Jesus can wash the sin of baby killing right from you, ma’am.”

According to the DOJ press release, Chester Gallagher, 73, of Lebanon, Tennessee; Heather Idoni, 58, of Michigan; Calvin Zastrow, 57, of Michigan; Caroline Davis, 24, of Michigan; Coleman Boyd, 51, of Bolton, Mississippi; Dennis Green, 56, of Cumberland, Virginia; and Paul Vaughn, 55, of Centerville, Tennessee, are charged with “conspiracy against rights secured by the FACE Act, and committing FACE Act violations.”

Among that list of defendants, the 30-minute video shows Chester Gallagher (pictured at top) leading the protest inside the building. The federal government is now charging him and others with conspiracy because the pro-life leader used Facebook to announce and promote the Carafem protest, which the Feds call a “blockade" in their press release.

In a video posted by Mia Cathell, a Townhall reporter, heavily-armed FBI agents are seen arresting Tennessee resident Paul Vaughn. The video was filmed by his wife, who is seen protesting his arrest. It is not clear when the arrest was made.

Those defendants are referred to as “co-conspirators” according to the DOJ.

In what appears to be a separate charge, the DOJ said Eva Edl, 87, of Aiken South Carolina; Eva Zastro, 24, of Dover, Arkansas; James Zastro, 25, of Eldon, Missouri; and Paul Place, 24, of Centerville, Tennessee, are all charged with committing FACE Act violations as well.

Reacting to the FBI's sudden interest in pro-life protesters, fellow pro-life activist Caroline Smith points out the Feds have not made a single arrest - not one - after pregnancy centers were firebombed by abortion supporters over the summer.

Smith is a member of Progressive Anti-Abortion Uprising, an usual pro-life group that counts left-wing activists, feminists, and atheists among its leaders. She tells AFN the group is witnessing the FBI attempt to scare people away but that tactic, she insists, won't work.

"We're not going to let that stop what we're doing," Smith says. "We fully believe that abortion is murder, and we believe children have the right to be rescued."

Meanwhile, Miller was asked by AFN if the Mount Juliet protesters should be prosecuted if they did violate the FACE Act.

“Absolutely not,” she says. “They don’t deserve to be charged at all. They were there to defend life.”

In the livestream video, a pro-life activist was filming outside the abortion clinic as fellow protesters appeared in handcuffs with Mount Juliet police officers marching them out.

“No fear!” someone yells at them from the public sidewalk. “Christ is King!”

A country in Europe is changing its abortion rules to hopefully correct problems caused by left-wing thinking.