Trump says Evangelicals 'disloyal' in race that has yet to start

In his new race for the White House, Donald Trump’s newest target is evangelical leaders who are not backing him in the Republican primary, at least not yet, but his complaint is generating unhappy comments about the former president’s demands.

In an interview with CBN, chief political analyst David Brody asked Trump about a lack of public support from that vital base of the Republican Party.

"I don't really care,” said Trump, who obviously does care about the lack of endorsements from evangelical leaders after he announced a White House run two months ago. 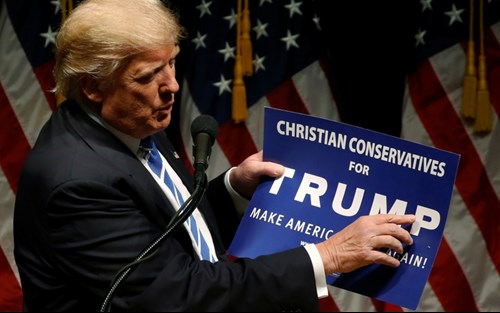 Trump went on to point out three justices are sitting on the U.S. Supreme Court, where Roe v Wade was overturned last summer, thanks to him.

To his credit, Trump also spoke in person at the annual March for Life rally in 2020, the only Republican president to ever do so, but just two weeks ago the former president blamed the GOP’s midterm losses on staunch pro-life candidates who turned off voters. That comment angered many pro-life leaders who felt betrayed by the pro-life former president.

Back in November, Trump mocked Gov. Ron DeSantis at a political rally because the popular governor is expected to run for president and thus be a major rival to Trump in 2024.

In a calculated effort to get an early start, Trump announced his White House run Nov. 16, now two months ago, but the momentum of his campaign was disappointing his staff just weeks later.

Reacting to Trump’s comments to Brody, “Today’s Issues” radio host Tim Wildmon told his audience a lot of political water has passed under the bridge since 2016.

“I'm sure [Trump] sees it that way. I don't see it that way,” said Wildmon, who is president of the Mississippi-based American Family Association. “Just because somebody has a different take on politics in 2022 than they did in 2016, that doesn't mean that they are disloyal.”

Wildmon, who routinely praised and criticized Trump on the air during his term, attended Trump’s 2017 inauguration where he also attended a worship service that morning as an invited guest. At the worship service, evangelist James Robison and pastor Robert Jeffress took turns preaching to the gathering at St. John’s Church.

Back in 2016, during the Republican presidential primary, Jeffress raised eyebrows when he became the first prominent evangelical leader to publicly back Trump’s candidacy in what was then a crowded field of candidates. The justification for supporting the trash-talking billionaire over other candidates, Jeffress said at the time, was Trump was the most likely candidate to defeat Hillary Clinton on Election Day.

Reached this week about Trump’s comments to CBN, Jeffress declined to comment to AFN.

Back on the “Today’s Issues” radio show, co-host Ed Vitagliano said he is waiting to see who jumps into the White House run as 2024 nears.

“I look at who can win,” Vitagliano said, “and in winning hinder the far-left agenda, which I think is destructive and corrosive to our country.”

If Trump does win the GOP nomination for president again, AFN news director Fred Jackson predicted a majority of Evangelicals will repeat 2016 in order to keep the Democrat nominee out of the White House.

'Greater Idaho' push gets a nudge with interstate compact bill

What seemed like a far-fetched idea by right-wing Oregonians to break away from their left-wing state is gaining traction thanks to legislation that would begin a dialogue with neighboring Idaho.