Pennsylvania’s largest daily newspaper has endorsed Dr. Mehmet Oz and his U.S. Senate campaign, which is a positive sign for the celebrity doctor-turned-candidate and a troubling one for his struggling Democrat opponent.

“We believe Mr. Oz is the better bet for Pennsylvania," states the endorsement by The Pittsburgh Post-Gazette.

The editorial, which published Nov. 1, called Oz a “unifier” and predicted he will work with Democrats in the Senate. The newspaper also slammed John Fetterman, the Democrat candidate, for his lack of transparency after suffering a stroke. 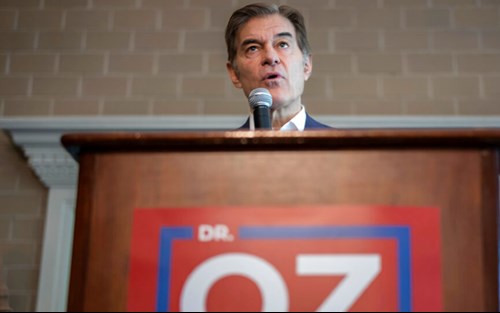 Diane Gramley, who leads the American Family Association of Pennsylvania, says the Post-Gazette is not a right-leaning newspaper but it considered the “whole picture” of the key U.S. Senate race.

“And they decided that Mehmet Oz had more life experiences, and was much more likeable, than John Fetterman,” she says of the newspaper endorsement.

Back in May, during the Pennsylvania primary, Republican voters faced a whopping 16 candidates vying to win the GOP nomination. Oz emerged from that group in his first-ever political campaign and in a state where he had recently moved to after living in New Jersey. But the carpetbagger and rookie candidate pushed on through the summer, always trailing Fetterman, the state’s lieutenant governor, in the polls.

During the same primary season, Fetterman suffered a stroke the weekend before the Democrat primary. Instead of bowing out, he remained in the race even though voters now know he struggles to think and speak clearly and coherently. That became terribly evident during last week’s Senate debate, and now Democrats who are accused of hiding his health from voters could watch the important seat slip away because of it.

“It was a disastrous debate for John Fetterman,” Gramley says of the debate. “It was very clear that he has not recovered to the point that his handlers are saying he has recovered from the stroke in May.”

The editorial said Fetterman’s lack of transparency about his stroke “suggests an impulse to conceal and a mistrust of the people.”

Voters in a growing number of counties in eastern Oregon want to officially leave The Beaver State and become a part of Idaho.