'October Surprise' against Walker not so unexpected in must-win race

NFL-standout-turned-Senate-candidate Herschel Walker is experiencing the political version of a fourth-quarter fumble after an allegation surfaced that he paid for a girlfriend’s abortion in 2009.

In political campaigns, the claim against Walker is called an “October Surprise.”

That is when a candidate is hit with a last-minute accusation that is intended to throw the political campaign off course in the final stretch and force the candidate to run to TV cameras to explain, or deny, or admit, to the allegations.

In the case of Walker, left-wing news website The Daily Beast hit him with an Oct. 4 story in which the unnamed woman says she has a check receipt and a “get well” card from him.

That would mean she has held onto both for more than a decade.

A USA Today story about the allegation literally called it "October surprise" in its headline, and the story quotes both liberal and conservative sources who predicted it won't matter at this point to Georgia's voters.

Forced to respond to the allegation, Walker has called it a “flat-out lie” and insisted he doesn’t know the name of the accuser because the incident never happened. 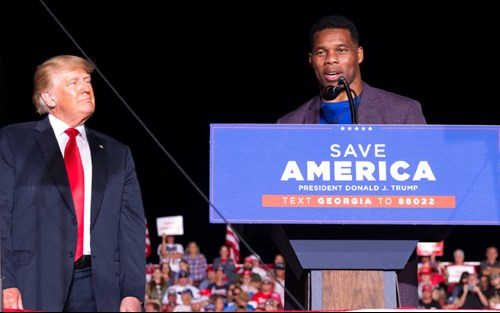 “But it just shows how desperate they are right now,” he told Fox News. “They see me as a big threat and I know that.”

In that same interview, Walker was confronted about fiery accusations from his son, Christian. In social media posts, the son is accusing Walker of “lying” about being a “moral, Christian, upright man," because he neglected both him and his mother.

In the Fox News interview, Walker went on to state that God has forgiven him for his past. He also refused to hit back at his son, stating he loves him “unconditionally.”

Walker, who is attempting to unseat Sen. Raphael Warnock, has reportedly frustrated national Republican leaders for a poorly-run campaign that is an important win in the 50-50 U.S. Senate. After the rookie Senate candidate made campaign gaffes and hid the number of children he has fathered, top election strategists were dispatched to Georgia during the summer to help Walker improve his campaign as it entered the fall.

In the same pivotal campaign, Sen. Warnock has faced his own accusations of neglect and even marital abuse from ex-wife Oulèye Ndoye. Back in April, The Washington Free Beacon reported a judge ordered Warnock to attend court hearings with Ndoye to resolve issues over paying childcare and not showing up for child visitation.

Warnock and Ndoye divorced in 2020. That is the same year Atlanta police released footage in which she told an officer her husband had driven over her foot during a fight.

Warnock, meanwhile, has watched his 2022 re-election campaign get flooded with campaign donations that rival any incumbent in the Senate, Republican or Democrat.

Warnock has maintained a lead over Walker in election polls but most show a single-digit lead over the GOP candidate despite Walker's missteps and Warnock's campaign chest.

Reacting to the political attack on Walker on her morning radio show, AFR host Sandy Rios reminded her audience that Democrats routinely make last-minute accusations against other conservatives, such as U.S. Senate candidate Roy Moore and Brett Kavanaugh, in an effort to turn their own supporters away from them.

Rios, who is personal friends with Moore, repeatedly said the sex-abuse allegations against him that surfaced during the 2017 race were false. A woman went to The Washington Post with allegations dating back to 1979, and that claim and others likely cost him the election.

Kavanaugh, now seated on the U.S. Supreme Court, was nominated by then-President Trump. The allegations against Kavanugh included sexual assault and even a gang-rape claim involving Kavanaugh and other high school boys.

“Do you see the pattern?” Rios pressed. “Don’t let them do that to your mind.”

An immigration border enforcement organization is blasting House Speaker Nancy Pelosi (D) for her recent comments about immigrants in Florida.