Florida’s governor has stirred up a hornet’s nest of livid Democrats after dropping illegal aliens in the wealthy, liberal enclave of Martha’s Vineyard, and now everyone from immigration attorneys to a Texas sheriff are vowing to make Gov. Ron DeSantis pay for humiliating them all.

For months over the summer buses have been traveling north from border states Texas and Arizona to transport illegal aliens to Democrat-run New York City and to Washington, D.C., where city leaders were forced to deal with housing and feeding thousands of unwanted visitors in their self-described “sanctuary” cities. 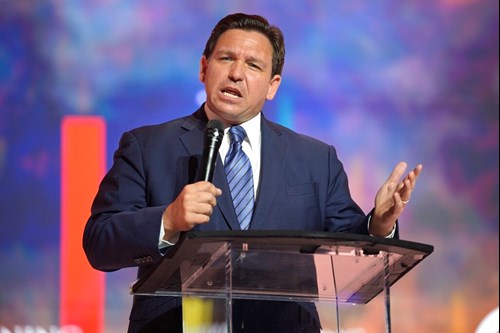 That political stunt was predictably denounced by unhappy Democrats such as New York’s mayor Eric Adams, who had bragged as a mayoral candidate the city of immigrants welcomed more, but it appears Gov. DeSantis has one-upped his red state counterparts with the Martha’s Vineyard stunt. After 48 illegals from Venezuela showed up on the swanky island late last week, AFN reported Democrats accused DeSantis of kidnapping them – literally. California’s governor Gavin Newsom (and likely 2024 presidential candidate) outdid  fellow Democrats by asking the U.S. Dept. of Justice to investigate the Florida governor.

The two chartered flights that landed in Martha’s Vineyard last week have since been tracked to San Antonio, Texas. In that city the Venezuelans were reportedly approached outside a shelter housing illegal aliens and were recruited to board a plane for immigrant-welcoming Massachusetts. From there the plane landed briefly in Florida, likely to qualify for state funds to pay for the relocation, before departing for Martha’s Vineyard.

"And the hypocrisy," he says, "is certainly not lost on people here."

Almost a week later, in their own version of one-upmanship, Democrats now appear to be competing with each other to denounce DeSantis, who is expected to run for the White House and is therefore a plumb target for political destruction. That is why some of the illegal aliens – “migrants” according to the national media – who landed in Martha’s Vineyard have filed a class-action lawsuit against DeSantis with help from Lawyers for Civil Rights, a Massachusetts-based, immigration-rights law firm. According to an NBC News story about the lawsuit, Lawyers for Civil Rights allege the red-state governors “manipulated” the illegal aliens, “stripped them of their dignity, deprived them of their liberty, bodily autonomy, due process, and equal protection under law,” according to the lawsuit.

The left-wing immigration attorneys also allege the Venezuelans were tricked into boarding the flight for Massachusetts because they were handed “official-looking materials” that promised them benefits, such as cash assistance and employment, in the state.

Despite the attorneys’ claims of fake brochures, the cover of the brochure (pictured below) advertises the website for a real state agency, the Office for Refugees and Immigrants. Inside the brochure, the Venezuelans were promised everything from housing assistance, groceries, and job training to helping register their children for school. AFN easily found that same list of benefits on the Office for Refugees website, too. 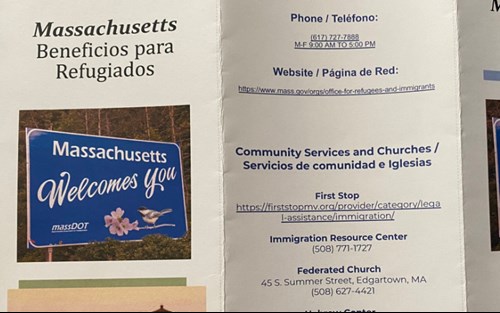 It's unclear, however, if the brochure is a product of the State of Massachusetts or was created by a second party as the immigration attorneys claim in the lawsuit.

Meanwhile, in the Texas county where the flights originated, Bexar County Sheriff Javier Salazar became a left-wing hero overnight by vowing to investigate the chartered flights. In a CNN interview, the Democrat sheriff said it appears the Venezuelans were “lied to” and deceived about their trip north.

“That could be a crime here in Texas,” he said, “and we will handle it.”

In a display of fairness, CNN followed the sheriff’s comments with a clip of DeSantis telling Fox News the person who arranged the flight in San Antonio obtained consent forms before the plane took off.

In a statement to Fox News, a spokesperson for Gov. DeSantis called the lawsuit “political theater” and provided the cable news outlet with a copy of the consent form signed by the 48 Venezuelans.

“The immigrants were homeless, hungry, and abandoned – and these activists didn’t care about them then,” the spokesperson, Taryn Fenske, told Fox News. “Florida’s program gave them a fresh start in a sanctuary state and these individuals opted to take advantage of chartered flights to Massachusetts.”

Reacting to the lawsuit, Ira Mehlman of the Federation for American Reform, an immigration watchdog, tells AFN critics of DeSantis “don’t have a leg to stand on” after staying quiet while the Biden administration dumped tens of thousands of illegal aliens all over the country, including in red states.

“Everybody recognizes,” he says, “that the border situation is the creation of the Biden administration.”

Speaking to Fox News host Sean Hannity, DeSantis acknowledged he and the other red-state governors have been accused of political stunts. “But the biggest stunt was Biden coming into office and reversing Trump’s policies,” he countered.

Editor's Note: This story had been updated with comments from Brian Camenker.

A forensic computer expert who has studied data from voting machines across the country says it's clear to him that election data has been manipulated, rendering those results not worthy of being trusted.