Could unusual race in Granite State decide control of Senate?

A U.S. Senate race in New Hampshire could flip to the Republican Party according to a political activist who is watching that race and who says GOP candidate Donald Bolduc - who was cheered by Democrats and jeered by GOP leaders - could surprise both political parties.

In the Sept. 12 primary, Bolduc narrowly defeated state senator Chuck Morse and four other candidates to win the nomination. He now faces first-term Senator Maggie Hassan. She breezed through the Democrat primary but is viewed as a vulnerable incumbent in the midterm elections.

With a late primary, and just eight weeks before the general election, polling is slim in that race but a University of New Hampshire poll from five months ago showed Hassan leading Bolduc 47%-46% in a possible matchup.

Democrats and the media have described Bolduc as a crazed right-winger, which is why Democrats openly wanted him in the general election instead of Morse. With an eye on November, however, Bolduc backtracked from his "stolen election" claims about Donald Trump in a Fox News interview Thursday morning. The election "was not stolen," he said, but there was fraud that needs to be fixed so voters have faith in elections.

Rob Chambers, vice president of AFA Action, says Hassan is known as a “radical liberal” who has been endorsed by Planned Parenthood, and she is seeking re-election during hard times created by Democrats.

“People are seeing our country fall apart before them. They're seeing the failed policies of a Democratic president,” he says. “And so I think it's really going to have a negative impact on Democrat candidates in the general election." 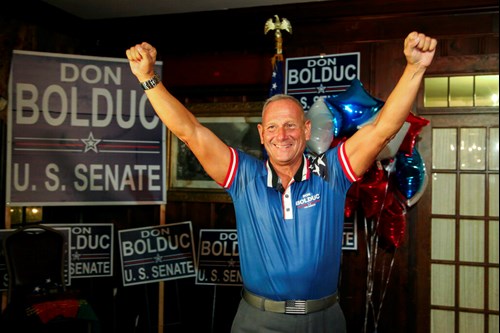 Bolduc, a retired U.S. Army general, was portrayed by both Democrats and liberal Republicans as a far-right “election denier” during the GOP primary for insisting Donald Trump won the 2020 election. Trump never formally endorsed Bolduc, which robbed Democrats of using that against him, too, but Democrats openly criticized Morse during the primary on the expectation it would help Bolduc win that race.

Morse, the state senate president, was portrayed by panicking Republicans as the “establishment” candidate who was most likely to steal the seat from the vulnerable incumbent Democrat.

Chris Sununu, the state’s Republican governor, endorsed Morse during the primary and openly mocked Bolduc as a non-serious candidate and a “conspiracy theorist.”

After his loss Tuesday, however, Morse endorsed Bolduc. "The focus this fall," he said, "needs to be on defeating Maggie Hassan."

After a new poll shows Georgia U.S. Senate candidate Herschel Walker has moved ahead of the incumbent Democrat he aims to defeat, a political activist says the Republican could pull off a David-versus-Goliath victory in the state.