Subscribe
Whistleblowers ousted top FBI official but is he just a scapegoat?

Whistleblowers ousted top FBI official but is he just a scapegoat?

It appears more and more FBI whistleblowers are attempting to clean up their once-respected law enforcement agency by outing partisan Democrats and their backroom scandals, but is it too late for the scandal-ridden agency to redeem itself?

Late last week, a whistleblower complaint finally claimed a scalp at the FBI: Timothy Thibault, who oversaw the crucial Washington Field Office, and who went after Donald Trump and played a role in Hunter Biden’s scandal-filled laptop, turned in his badge and left the building.

Morrison and Foerster, a D.C. law firm that represents the now-former FBI official, denied media reports he was escorted out of the building like a criminal. Regardless of how Thibault left, he was accused of using his authority to protect and defend the Biden family and to go after Donald Trump.

Thibault’s ouster last week dates back to May, when Sen. Chuck Grassley (R-Iowa) learned from a whistleblower that Thibault’s social media posts violate agency policy. More whistleblowers came forward in July, this time with allegations Thibault went to his bosses seeking to investigate Donald Trump. He didn’t disclose, however, he was working with what Grassley called a “left-aligned organization” to do so. That organization has not been named.

The allegation that Thibault used his authority to downplay the laptop’s authenticity, and to stop further probes into its contents, accounted for the third allegation the FBI official was blatantly working to protect the son of the U.S. president while wearing an FBI badge. 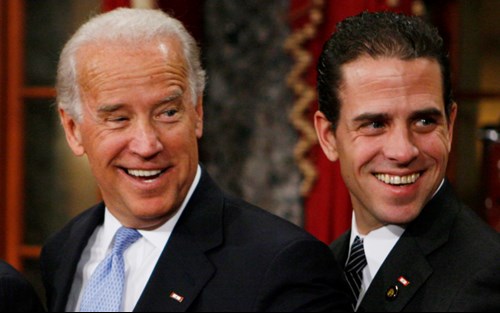 In a statement last month, Grassley said whistleblowers told his senate office the FBI has “extensive information” on Hunter Biden and alleged crimes he committed.

"That information allegedly involves potential criminal activity such as money laundering,” the Republican senator said. “According to allegations, the underlying information was verified and verifiable. However, instead of green-lighting investigative activity, the FBI shut it down."

As far as national politics go, there is good reason for Democrat-protecting FBI agents to shut down any such investigation. In addition to revealing his sad history of drug abuse and cavorting with prostitutes, the laptop revealed how Hunter Biden also crisscrossed the world making multi-million dollar business deals with corrupt and influential businessmen. Joe Biden has said he is not involved in any such deals, but the laptop mentions a 10% business payment from a Chinese business deal to the “big guy." That person is said to be Joe Biden according to Biden business partner Tony Bobulinski.

Thibault’s days as an FBI agent could have been numbered by another kind of whistleblower: Facebook CEO Mark Zuckerburg. In a recent Joe Rogan interview, he disclosed that the FBI asked the influential social media company to watch for “Russian propaganda” as the 2020 presidential election drew closer. Just weeks later, The New York Post published its exclusive story about the laptop, which was dismissed as “Russian disinformation” by Democrats and the liberal media.

According to Rep. Jim Jordan (R-Ohio), in a Fox News interview last month, a total of 14 FBI agents have come forward to discuss what he called the “political nature” of the U.S. Justice Department.

Reacting to the scandal-plagued FBI, AFR radio host Sandy Rios said this week there is no way the American public can trust the FBI right now.

“You don't know who is good and who is bad,” she said. “We've crossed the Rubicon with the FBI. There's no question about it.”

Meanwhile, it has not gone unnoticed that Morrison & Foerster, the D.C. law firm representing Thibault, is representing him pro bono.

The anti-Republican rhetoric being used by the mainstream media and by Democrats – including President Joe Biden – is angry and inflammatory … and a political pundit warns it may not end well.