In the race for a safe U.S. Senate seat in blue Colorado, Democrats tried some risky – and illegal – tricks during a Republican primary, and the trickery is being blamed on a senator from New York.

Earlier this summer, in a primary race for the Senate, Republican candidates Ron Hanks and Joe O’Dea were competing to see who would face the Democrat incumbent, Sen. Michael Bennet. GOP primary voters chose O’Dea over Hanks, 54%-45%, but only after a political flyer hit mailboxes claiming the Colorado Republican Party had endorsed Hanks, a state lawmaker, over businessman O’Dea.

That were a couple of huge problems with the flyer: the state’s Republican Party did not endorse a candidate and, worse, the flyer itself likely broke federal election law by not stating what candidate or political action committee created it and mailed it. 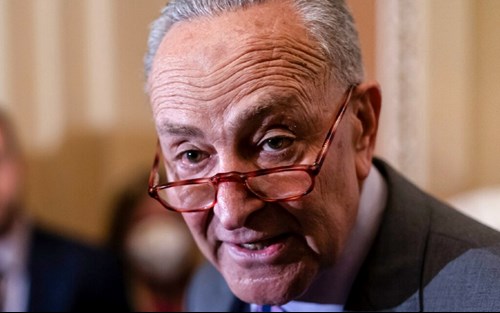 “Let me be clear: the Colorado GOP has not and does not endorse in primary races,” Kristi Burton Brown, the GOP chairwoman, said at the time.

Jeff Crank, a Colorado-based talk show host, tells AFN that voters across the state opened their mailboxes to find one flyer after another urging GOP voters to support Hanks, who was considered the long-shot candidate, over O’Dea who is a wealthy, Denver-based businessman.

“And it just got disclosed last week,” Crank advises, “that it was actually Chuck Schumer's PAC.”

According to The Gazette newspaper, federal campaign records showed a newly-formed PAC named Democratic Colorado was behind the ad campaign that spent $4 million urging voters to support Hanks in the primary. The “sole donor” to that group, the Gazette said, was Sen. Schumer’s PAC, the Senate Majority PAC.

If there was any regret for the underhanded lies, Schumer’s PAC didn’t admit to it.

“Our efforts,” J.B. Poersch, an official heading Senate Majority PAC, later bragged, “forced O’Dea to burn through cash, embrace Trump, and show his true colors as a rubber stamp for Mitch McConnell and a dangerous MAGA agenda that is totally out of step with the voters who will decide the general election in Colorado."

Colorado is a dependably “blue” state, where Bennet has held the senate seat since 2009 and where he has even set state records for total votes in a statewide election.

So if a Republican faces an uphill battle to defeat the incumbent Democrat, why spend $4 million in an underhanded attempt to trick Republican voters?

Crank says the answer is pretty simple: Donald Trump remains the hated villain of the Left, and a political party with no real message is desperate to tie the former president to two GOP candidates in Colorado who were never endorsed by him.

“They know that they cannot win on the messaging that they have,” Crank says of Democrats. “The economy is tanking. Gas prices are out of control. Inflation’s raging.”

For the GOP challenger O'Dea, there is some glimmer of hope: RealClearPolitics shows the race "Leans Dem," meaning it is not considered a sure win for the Democratic Party.

Just in time for U.S. Senate race, border wall gets a makeover

The “big” and “beautiful” U.S.-Mexico border wall that became a key campaign issue for Donald Trump is getting a makeover thanks to the Biden administration, but a critic of the current president says dirty politics is behind the decision.