Republican candidates for Arizona governor Karrin Taylor Robson (left) and Kari Lake have been endorsed by Mike Pence and by Donald Trump respectively.

A soon-to-be-decided Republican gubernatorial primary in Arizona is being described by some political pundits as a preview of the 2024 presidential race.

The GOP gubernatorial primary is August 2, now a week away, with four candidates competing for the nomination to replace Doug Ducey, the state’s term-limited Republican governor. Among those four, Kari Lake has been endorsed by Donald Trump and Karrin Taylor Robson has been endorsed by Mike Pence. 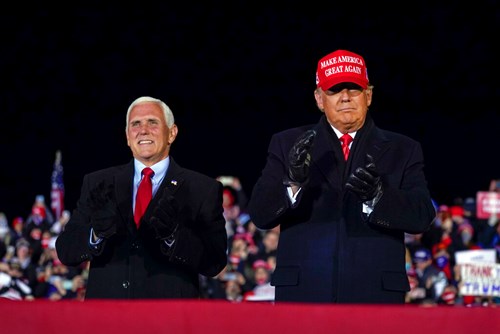 Lake is currently leading in the four-person primary race according to two separate polls compiled by RealClearPolitics. The RCP average shows Lake at 39% and Robson, her closest rival, at 31%, though Lake leads Robson by only five points in one of the polls.

Robson has also been endorsed by Gov. Ducey and by U.S. Rep. Matt Salmon, who withdrew from the GOP primary in June citing the crowded ballot.

According to IVoterGuide, both Lake and Robson are rated “Conservative,” and so is Tulliania-Zen. Neely is rated “Leans Conservative.”

Rob Chambers with AFA Action, which produces the in-depth voter guide, says Pence is involved in political races across the country because the former vice president is seriously considering running in 2024.

“It's not going to net you much of anything,” he says of a Pence endorsement. “The only thing it's going to really do is probably galvanize the GOP political establishment. So it's not shocking to see Pence endorsing candidates other than those that Trump would endorse."

Tossups sizing up as determinants in who will lead Senate

A conservative political scientist is urging Republicans to wake up and get to work if they hope to turn around poll numbers in key races that show Democrats maintaining control of the Senate in 2022.